"See, today was a day where I felt I could do something special from the start itself. "- Jaydev Unadkat

Speaking to IPL20.com after the match, Jaydev said that this was a much-needed win for RPS and it only boosts their confidence going ahead. “Ya, I guess a much-needed win for us, even we won the last couple of games so we were on a winning streak as well. So I guess this probably will boost our momentum and you know to beat a side like Mumbai at Wankhede is always you know a huge boost to the side,” Unadkat said.

He lauded efforts of the whole side and not just any particular player. “I guess we did well as a unit. Well that’s the most important thing I guess all of us bowled in partnerships. We took wickets when it was needed, when it was much necessary to take those wickets I guess that’s what make you win games in such low-scoring games and really happy for my team and for myself and for everyone of us,” he explained.

Jaydev spoke in length about his performance in the match. “See, today was a day where I felt I could do something special from the start itself. You know there are some days where players feel that they will be the ones. I guess I just stuck to my strengths, my strength was to bowl cutters and the wicket was helping me a bit so I just stuck to my plans,” he opined.

Speaking about the final over, Jaydev complimented Steven Smith’s skills. “You know we had the right fielding placement that was really important in the last over, on the first ball when I got Hardik out I was like yeah this is the time when I could do something special for my team and I am really happy that I did that,” he said.

Speaking about the controversial call by the umpire, Unadkat said, “It was a close call. I guess he was shuffling a bit on the offside as well so I think in a game like this where everything is there for the batsmen, there have to be something for the bowlers and that one moment went right for me.” 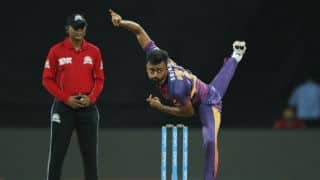 IPL2017: 'Don't know whether it was actually a wide-ball', says Harbhajan Singh after MI’s loss to RPS