Batting first, it was New Zealand skipper Kane Williamson who showcased his craft with the bat, striking 51-ball 89 that included 6 fours and 5 sixes.

Sunrisers Hyderabad (SRH) notched-up their fourth straight win at home in the Indian Premier League (IPL) 2017. SRH went up against Delhi Daredevils (DD) at the Rajiv Gandhi International Stadium, Hyderabad in Match No. 21 of IPL 10. Mind you, DD have always been poor travelers in IPL. Batting first, it was New Zealand skipper Kane Williamson who showcased his craft with the bat, striking 51-ball 89 that included 6 fours and 5 sixes. His partnership with Shikhar Dhawan gave SRH an imposing total of 191 runs. Williamson, who was warming the benches so far, came in for Afghanistan’s Mohammad Nabi. In the end, Delhi Daredevils fell tantalisingly close, losing the match by 15 runs. FULL CRICKET SCORECARD, Sunrisers Hyderabad vs Delhi Daredevils Match 21

Williamson, who was adjudged as Man of the Match in the post-match presentation ceremony, said that he was fortunate to get the game after the form his teammates have been in. “Nice to get a game. The guys have been doing really well, fortunate to get a game,” he added. He further added that SRH were fortunate to bat first and build partnerships. “The conditions were good and important that we got a good score batting first. Partnership was the key and guys really carried it well towards the end,” Williamson said.

Williamson, on his batting opined, “I was trying to play the situation as well as I could. I suppose once the platform was built, it was to increase the run rate.” Williamson did not undermine the importance of bowling and fielding in his speech. “Partnership with the ball in hand, fielding is equally important,” he explained.

Williamson was mostly out of the field due to a small niggle to his hamstring. “I just had a little niggle, probably not going to do the team too much with the niggle I had,” Williamson concluded. 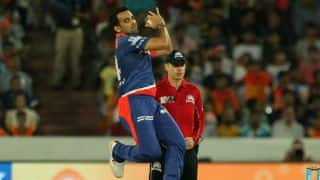