Chasing 184, the staggering duo of Gautam Gambhir and Chris Lynn bludgeoned the ball and stitched the highest opening stand of IPL.

Kolkata Knight Riders (KKR) thrashed Gujarat Lions (GL) by 10 wickets in their opening tie in the 10th edition of Indian Premier League (IPL). This was the first home match for Lions, played at Saurashtra Cricket Association Stadium, Rajkot. Chasing 184, the staggering duo of Gautam Gambhir and Chris Lynn bludgeoned the ball and stitched the highest opening stand of IPL. Lynn, in particular, played a dashing knock of 93 off 41, including 6 fours and 8 sixes. Batting first, thanks to Suresh Raina and Dinesh Karthik, Lions managed to put 183 runs on the board on a flat track. Karthik feels GL did not play up to the mark against KKR

Gambhir was impressed by Lynn’s performance. In the post-match ceremony, he said, “We know what he [Chris Lynn] can do when he is on song. We have to give him a longer run. If this is the way he bats, it takes a lot of pressure off the batting line-up. Hopefully, he can continue his form like this and keep smacking it.”

“Lynn can take on any fast bowler in the world right now. Hopefully, rest of us can play around him,” he explained. Meanwhile, star of the moment, Lynn, said, “If I can continue this momentum, it will be good for the team. I like the ball coming on (to the bat) and I am used to that. So I am happy.” It was Gambhir, who prior to the tournament, instilled confidence in Lynn and asked him to open the innings for KKR. 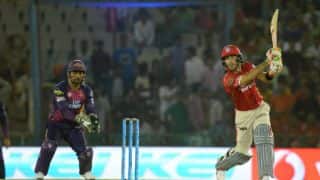