Gautam Gambhir and Robin Uthappa registered their fourth 100-plus stand to script an emphatic, 7-wicket win over Delhi Daredevils (DD) at Eden Gardens. With this win, Kolkata Knight Riders (KKR) remain at the top of IPL 2017 points table.

Gautam Gambhir and Robin Uthappa registered their fourth 100-plus stand to script an emphatic 7-wicket win over Delhi Daredevils (DD) at Eden Gardens. With this win, Kolkata Knight Riders (KKR) remain at the top of IPL 2017 points table. With 16 points to their name, the Knight Riders need one win from the next five matches to qualify for the playoffs. In other news, Gambhir has now most runs (3,311) for an IPL captain, surpassing MS Dhoni. Full Cricket Scorecard, Kolkata Knight Riders vs Delhi Daredevils, IPL 2017, Match 32

The Sunil Narine experiment did not bear fruits. Kagiso Rabada dismantled his defence with a delivery that held its line. Before Narine could read it, Rabada had completely outfoxed him. Then came the duo of Gautam Gambhir and Robin Uthappa to the fore. As always, they led the resurgence and did what they do the best. However, Uthappa has had a torrid time against the Daredevils. Off the 134 deliveries he had faced against them before this contest, he collected 139 runs. That did not matter Uthappa tonight. He continued his solid form. He started off with an elegant flick on the leg-side. Pitched on middle and leg, he leaned forward and let his wrists do the rest.

Gambhir, for the matter, did not play second fiddle. He dropped the anchor and joined Uthappa in the rampage. Meanwhile, Zaheer Khan went off the field after a niggle to his hamstring. He bowled only 1.1 overs.

Uthappa, however, took over the responsibility, letting Gambhir take back seat. Off Chris Morris, he collected two sixes and a four in the same over. He then targetted Patt Cummins and pulled one over deep mid-wicket boundary, followed by a lofted drive over mid-off. Be it short or full-pitched, Uthappa made no mistake putting away ordinary deliveries.

Not only did the Daredevils fail to bowl in the right channel, they had a few setbacks while fielding. When Uthappa was batting on 9, he skied one into the air. Amit Mishra from fine-leg and Sanju Samson from mid-wicket ran to pouch it. Nonetheless, a miscommunication led it to a dropped chance, gifting Uthappa a lifeline. In fact, Uthappa had gone on to blast 75 when Jaydev Unadkat dropped him in the last game.

Eventually, the blunder dearly cost them as Uthappa scored his consecutive half-century, the first time since the 2014 edition. In other news, he hit the most sixes (17) in the ongoing season. Last year he had 15 sixes to his name. Full Updates: KKR vs DD, match 32

Given the way he was batting, sending him back looked like an uphill task, but Karun Nair’s brilliant fielding ended his innings at 59.

The Daredevils, in the first innings, had a spectacular start. Sanju Samson and Karun Nair stitched 48-run stand off 29 deliveries. Though Narine stopped Nair’s knock, Samson went on to score 60 off 38 comprising of 4 fours and 3 sixes. He added a vital 75 runs with No. 3 Shreyas Iyer who fell three short of a half-century. However, the middle order could not capitalise on the foundation laid and accumulated only 20 runs off the last 4 overs. Nathan Coulter-Nile was the pick of the bowlers, taking 3 for 34.

Unlike the Knight Riders, the visitors could not script a comeback in the middle order. If anything, Gambhir obscured with spectacular batsmanship. He stayed unbeaten on 71 and is now the owner of the Orange Cap. 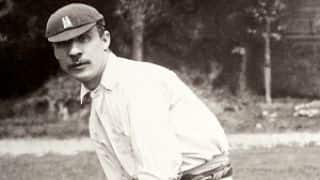