It must be remembered that Rising Pune Supergiant’s move of sacking Dhoni as captain and appointing Smith ahead of IPL 10 did not go down too well with the Indian fans and experts.

Harsh Goenka, the chairman of RPG Enterprises and brother of RPS owner Sanjiv Goenka, found himself embroiled in a controversy after their win over Mumbai Indians (MI) in the opening clash of Indian Premier League (IPL) 2017. Rising Pune Supergiant (RPS) registered an impressive 7-wicket victory in the first match, powered by half-centuries from Steven Smith (84 not out) and Ajinkya Rahane (60). The team that had finished at the dead bottom in IPL 2016 certainly made a winning start to the new season. However, Harsh Goenka’s tweet over Dhoni and Smith turned out to be controversial. FULL CRICKET SCORECARD: Rising Pune Supergiant (RPS) vs Mumbai Indians (MI), IPL 2017 Match 2

It must be remembered that RPS’ move of sacking Dhoni as captain and appointing Smith ahead of IPL 10 did not go well with the Indian fans and experts, with Sunil Gavaskar being the latest to criticise the move during a pre-match TV show on Thursday. However, after the game turned in the favour of RPS, with Smith hitting two sixes in a tense finish with Dhoni being at the non-striker’s end, Harsh Goenka’s tweet irked the Indian fans who panned him on Twitter. The tweet, which remained on his verified page for a couple of hours, was later on removed. FULL CRICKET UPDATES: Rising Pune Supergiant (RPS) vs Mumbai Indians (MI), IPL 2017 Match 2

Here are a few tweets that suggest what went wrong:

@hvgoenka In your dreams… No batsman can overshadow Dhoni. Take him out your team and see the fan count.. maybe you will get to know the reality

Looks like @hvgoenka didn’t like the Dhoni Dhoni chants in Stadium today. Ha ha, You have to live with it this season too #MSDhoni

Dhoni’s sacking as RPS captain was not well received by the fans, and the tweet, which somehow showed the revered Indian cricketer in bad light, gave them an opportunity to let out their emotions. 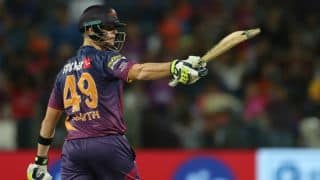 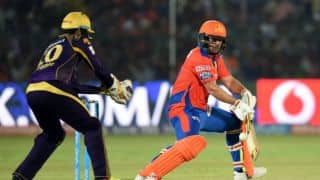