It all began with his criticism of the Indian cricket team's performance and star actor Amitabh Bachchan without taking names took a shot at Harsha Bhogle on his Twitter handle.

Kolkata: Harsha Bhogle is set to end his exile from cricket commentary after the official broadcasters of the Indian Premier League (IPL) today hinted that the renowned commentator could be seen in action in the 10th edition of the T20 tournament. “It’s our intention to get him back in the studio. However we have some paperwork formalities left but in all likelihood we may see him doing commentary in the upcoming IPL,” Prasana Krishnan, EVP and business head, sports cluster Sony Pictures Networks India, said here today. A popular face behind the camera, Bhogle has spent nearly a year away from the commentary box after he had a stand-off with the erstwhile BCCI administration. READ: IPL 2017: Virat Kohli could miss initial stages of IPL 10

Apparently, it all began with his criticism of the Indian cricket team’s performance and star actor Amitabh Bachchan without taking names took a shot at Bhogle on his Twitter handle. Bhogle’s comments also were not well received by former India captain Mahendra Singh Dhoni and team officials. The episode led to his ouster from the commentary team of Indian cricket team and last IPL but with a new administration in place in the BCCI, there seems to be a change in fortune for Bhogle, who was recently seen doing cricket analysis for a sports website.

The official broadcasters further said they would be organising various promotional activities across India and would continue with the Fan Park across 35 cities of the country during the April 5-May 21 tournament. “Our idea is to bring in human element into every match. Every fan will have a story to tell which would be unique than the stats,” Krishnan added. READ: Shah Rukh Khan-owned KKR issued show-cause notice by ED

Besides English (Sony SIX) and Hindi (Sony MAX), the IPL will be broadcast in Sony’s three regional language channels of Bengali, Tamil and Telugu. The Bengali commentators will be Ranadeb Bose, Joydeep Mukherjee, Abhishek Jhunjhunwalla, Saradindu Mukherjee and Subroto Banerjee. 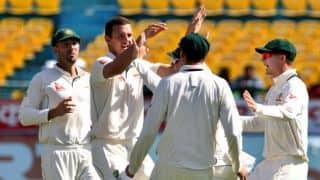