Batting first, the hosts went all guns blazing against a strong MI attack and reached to a near-200 total. Apart from Amla's 104*, Glenn Maxwell also hammered a quick-fire 18-ball 40.

Hashim Amla slammed his first hundred in Twenty20 (T20) cricket on Thursday as Kings XI Punjab (KXIP) set Mumbai Indians (MI) 199 runs to win in Indian Premier League (IPL) 2017, match 22 at Holkar Cricket Stadium in Indore. Batting first, the hosts went all guns blazing against a strong MI attack and reached to a near-200 total. Skipper Glenn Maxwell also hammered a quick-fire 18-ball 40. This was Amla s first hundred in T20s, after he missed out on his maiden century last year during IPL 2016, when he scored 96 against Sunrisers Hyderabad (SRH). KXIP, who have never lost a match in Indore, are in with a great chance to keep their record intact. LIVE CRICKET SCORECARD: Kings XI Punjab vs Mumbai Indians Match 22

Earlier, Rohit Sharma won the toss and invited KXIP to bat first. The MI fielded an unchanged side, while KXIP were forced to make as many as four changes to their XI. Last game s hero Manan Vohra was unwell and had to miss out. Eoin Morgan and David Miller made way for Shaun Marsh and Marcus Stoinis, while KC Cariappa also missed out, with Gurkeerat Singh and Swapnil Singh replacing the two Indians.

Amla and Marsh started well, adding 46 runs for the first wicket. Marsh was the aggressor of the two, scoring 26 of those runs. He almost threw away his start, giving a simple catch to Kieron Pollard at mid-wicket off Mitchell McClenaghan s bowling. Wriddhiman Saha replaced Marsh at No. 3.

While Saha failed to get going, Amla gradually got into his groove. However, when these two were batting, runs virtually dried up. Amla and Saha added 34 runs from 31 balls, and during this phase of play, there was a time when no boundary was scored for 27 balls.

Amla broke the shackles, hitting Krunal Pandya for a huge six over his head. However, Saha perished in the same over. The pressure was mounting on him and he succumbed to it, getting the furniture disturbed while trying to hit one out of the park. Saha scored 11 off 15.

Amla brought up his fifty but at this stage of the innings, KXIP needed a Maxwell boost! The skipper came out to bat and did exactly the same, carting the bowlers all around the park. He first took on Jasprit Bumrah, hitting him for a couple of boundaries in his over. But the 15th over of KXIP innings was absolute carnage, as Maxwell hit McClenaghan for 28 runs the second-most expensive over of this season. Maxwell hit 3 sixes and 2 fours in that over, which changed the course of the game, as suddenly, from 100 from 2 in 13 overs, KXIP were now 139 for 2 in 15.

Amla carried the momentum in the next over, as he smacked 2 sixes and as many fours off Lasith Malinga s bowling, collecting 22 runs off it. Maxwell fell soon after, with Stoinis joining him back in the hut shortly. But Amla kept going from the other end, collecting and odd boundary off Bumrah s next over before going all-out in the final over of the innings.

Malinga came in to bowl the last over, but got hit for two sixes, allowing Amla to get to a fine hundred. The South African run-machine completed his hundred in 58 balls, hitting 8 fours and 6 sixes in the process.

KXIP finally ended on 198 for 4 from 20 overs. For MI, Malinga conceded 58 from his 4 wicket-less overs and McClenaghan leaked 46 from his quota, picking up 2 wickets. Krunal and Bumrah did well to contain the batsmen during their spell. Harbhajan Singh, surprisingly, bowled just two overs. 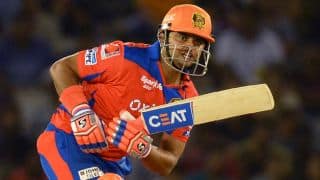 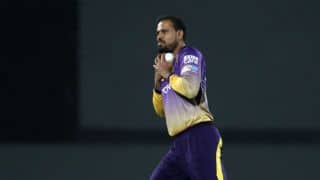