Virat Kohli has silenced many critics through his leadership skills and remarkable batsmanship, taking India to No. 1 spot in ICC Test Rankings and leading his IPL franchise RCB to the final in 2016.

Virat Kohli has silenced many critics through his leadership skills and remarkable batsmanship, taking India to No. 1 spot in ICC Test Rankings and leading his IPL franchise Royal Challengers Bangalore (RCB) to the final in 2016. And one of those critics who was sceptical of Kohli maturing as a leader was his IPL teammate and good friend AB de Villiers. In a recent promotional event, de Villiers appreciated Kohli s growth as a leader. South Africa s ODI skipper recently launched his app AB 17, which is a way for de Villiers to help his fans get access to his life on and off the field. FULL CRICKET SCORECARD: Rising Pune Supergiant (RPS) vs Mumbai Indians (MI), IPL 2017 Match 2

Speaking to a small group of journalists during the event, de Villiers said, It has been an amazing journey to watch him grow as a leader. I think in the start when the people mentioned to me he has leadership qualities and might become a captain one day, I doubted it. I thought he was very emotional. Always a great player, but I thought he was emotional with his reactions. I think he has found a way to deal with it. He is still an emotional character. He loves winning, and is very passionate but he has found a way to really manage that and control that. I know he is a great asset for Indian cricket. He leads exceptionally well.

Both the players have been lynchpins for RCB over the years and have always praised their batting skills whenever asked, I don t think I can be the best batsman. I don t play all formats. He is definitely the best player in the world. He has got competition in quite a few players like Steven Smith, Kane Williamson, and there are a lot of players Quinton de Kock coming through around the world. But I truly believe you can be the best player only if you play all formats in cricket. If you are in the top five in all three formats, that s when you know you can really play the game. IPL 2017: AB de Villiers to miss IPL 10?

RCB, who boasts of top limited-overs specialists batsmen with likes of Chris Gayle, de Villiers, Kohli, Shane Watson, were struck by series of injuries ahead of the tournament.

RCB lost their first match against SRH by 35 runs under Watson s leadership. Apart from the missing players, de Villiers felt RCB were sloppy on the field as well that cost them dearly, Last night s game was always going to be difficult. The team that played the final last year and the team that played last night I think there were about five or six changes. But I have never doubted the skill and the talent of the team. I think we let ourselves down with tiny little basics in the field. If we had hung onto the catches and stopped some of the fumbles, they would have got around 180, which would have been a very chaseable total. So, tiny little mistakes were made last night.

During the match, Kohli mentioned that he will return only when he is 120 per cent fit, especially with Champions Trophy around the corner. De Villiers backed the skipper and said, I think that s how it should be. No matter where you re playing or when. Even though there s a tournament coming, that s not the point. I don t think any guy should step on the field if he s not 100%. I ve always done it that way. Even though I m very, very keen to get on the field, I ll make sure that I m 100% fit because if you go on the park and you re 90%, you might be out for longer anyway. It doesn t make sense.

De Villiers confirmed that he would not be around for the entire tournament with the three-match ODI series scheduled from May 24. 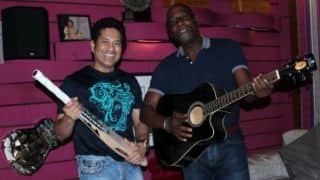