Sunrisers Hyderabad will take on Rising Pune Supergiant (RPS) at Pune in their next game on Saturday and look to make it three wins in a row.

Sunrisers Hyderabad (SRH) joined Kolkata Knight Riders (KKR) at the top of the Indian Premier League (IPL) 2017 with a 15-run win over Delhi Daredevils (DD) on Wednesday. SRH have now registered back-to-back wins in the IPL 017 batting first. They did this in their previous match as well, when they beat Kings XI Punjab (KXIP) by 5 runs. SRH mentor VVS Laxman was all in praise of Kane Williamson on a brilliant performance in the first match of the tournament. He also believes that young leg-spinner Rashid Khan is already playing on the minds of the batsmen. SRH will take on Rising Pune Supergiant (RPS) at Pune in their next game on Saturday and look to make it three wins in a row. FULL CRICKET SCORECARD, Sunrisers Hyderabad vs Delhi Daredevils Match 21

Speaking on the decision to include Williamson against DD, Laxman said, We thought that DD have a very good pace attack. We thought that Williamson at No. 3 will give us that solidity and he proved us right. It was about negating the fast bowling of DD and also putting pressure on them. I thought that was a positive move and Williamson is an outstanding batsman, his record speaks for itself. It is unfortunate that he does not feature regularly in the playing XI: in any of the other franchise he d probably get a chance. We admire Williamson s simplicity and also he is a great team man.

Even though he doesn t get to play as many matches as he would love to play or deserves to play, but he always helps the team, youngsters. He always maintains that intensity in the training sessions. He is a terrific role model and we are really happy and fortunate to have him in our squad. READ: IPL 2017: Kane Williamson wants to emulate Chris Gayle

Although Rashid did not pick up any wickets against DD, Laxman still believes that he is a threat: If you see the way the opposition batsmen are playing him yes, the last over went for some runs due to some brilliant shots by Shreyas Iyer but having said that, the way the opposition are playing is to ensure that they do not give wicket to Rashid. So, Rashid Khan is already playing in the minds of all the batsmen in the tournament. Whenever you look not to be aggressive against a certain bowler, you are already apprehensive about what the bowler is trying to do.

I feel he has already created an impact and we believed right from the time we took him in the auction that he has got that X-Factor. He has picked the wickets and he is bowling some tough overs. For a leg-spinner to bowl in the end, it shows the amount of confidence we have got in him, he added. READ: IPL 2017: Mohammed Siraj keen to learn from Bhuvneshwar Kumar

Laxman is also happy with the fact that SRH are not dependent just one bowler or batsman to win them matches. Laxman said, We don t want to rely only on one batsman. I believe Shikhar has been batting well throughout the season so far. It s just about converting your starts into a big score and this innings will give him the confidence going forward. Also Kane Williamson I mentioned that for someone playing his first match of this tournament the way he came in, he was very proactive and positive. The way he improvised and used the crease and put pressure on the DD bowlers was really good to see.

We are very fortunate to have a lot of talented players and unfortunately, because of the nature of the game, only XI can play and only a few batsmen can play. It’s really good to see that we are not relying only on one batsman or one bowler. David Warner is very important for the franchise, he has been a match-winner for us for 3-4 years. Again in the bowling department, it s been Bhuvi who has been excellent. It is however good to see contributions from other players. The more players that contribute and create an impact, the more confidence they wil get and the more confidence the team will get. READ: Shreyas Iyer feels DD could have restricted SRH to 180

The former Indian batsman was also impressed with the way newbies Siddharth Kaul and Mohammad Siraj responded after being picked. Impressed with the way Mohamad Siraj and Siddharth Kaul bowled. Especially Siddharth in the last over to bowl those Yorkers consistently was fantastic to see. Also Siraj for someone who is playing their first game in the IPL, the way he exhibited confidence and maturity when he came back for his second spell and then his third spell was really good to see. I really feel that we are playing well as a unit and we would like to continue this momentum, Laxman said. 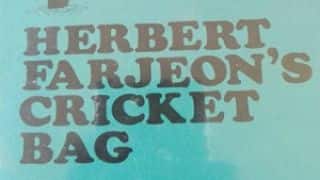