" He is a great player, today he showed all of his class. He came out really aggressively as you need to do in this format."- Kane Williamson

Sunrisers Hyderabad (SRH) continued to make the right moves as they trampled past Kings XI Punjab (KXIP) in Match No. 33 of the Indian Premier League (IPL) 2017. Chasing a mammoth target of 208 runs, KXIP batsmen were never in the game with wickets tumbling like nine-pin. Only Shaun Marsh showed some resilience but sadly that came in a losing cause. For SRH it was again David Warner, Shikhar Dhawan and Kane Williamson who stood out with the bat. The opening pair of Warner and Dhawan added 107, while Williamson who came in at No. 3 chipped in with a fluent 27-ball 54. Full Cricket Scorecard, Kings XI Punjab vs Sunrisers Hyderabad, IPL 2017, Match 33

Speaking to IPLT20.com, Williamson opened about his sides show and also praised Dhawan for his match-winning knock. Williamson spoke about Dhawan’s innings in great lengths. He said,” He is a great player, today he showed all of his class. He came out really aggressively as you need to do in this format. But he was very dominant today which I suppose made my job easier when I was to come out and try to get myself in because he was batting so beautifully.”

Speaking on the teams batting plan, Williamson explained, “Ya, we got off to a great start which set the platform to get a good first innings total, which we were fortunate to get. I suppose with the batting depth we had it was important to try and get in and increase the run-rate as best we could.”

The likes of Yuvraj, Moises coming in as well we look to do that. We are fortunate today to get such a good first innings total to be fair we needed all of them on a very good batting surface cause Punjab (KXIP) came very close,” quipped Williamson.

Williamson went on to explain how the role of a player in the side changes in T20s. “The role can change, obviously in T20 cricket. Depending on the situation, today was nice to get off to a good start,” he said. He further continued, “With Davi (David Warner) and Shikar, they played superbly well it really set the foundations for the guys coming in to try and I guess have a cameo to get us to above par score. So it was a very good effort by the batting unit. Really well done by the bowlers on a very good surface with a fast outfield.”

“Hopefully we can continue that as a batting unit. Our bowlers have been brilliant for this whole competition so far and very good at closing out games so it will be nice to keep this momentum,” Williamson concluded. 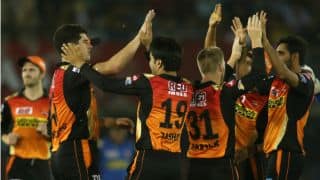