Needing 108 to win, Mumbai Indians never looked in any sort of trouble and won the match by 6 wickets and 33 balls to spare.

Karn Sharma put in his best T20 performance to help Mumbai Indians (MI) beat Kolkata Knight Riders (KKR) in the Qualifier 2 of the Indian Premier League (IPL) 2017 at the M Chinnaswamy Stadium, Bengaluru. Karn finished with 4 for 16, which bundled KKR out for just 107. Needing 108 to win, MI never looked in any sort of trouble and won the match by 6 wickets and 33 balls to spare. Karn believes that momentum plays a key role in T20s. Having won both the league matches against KKR, Karn felt that the momentum was with them and that’s why they won the Qualifier against KKR. FULL CRICKET SCORECARD: Mumbai Indians (MI) vs Kolkata Knight Riders (KKR), IPL 10, Qualifier 2

“We are playing well against them [KKR], last two matches we have won. It’s a T20 game, we got the momentum and won the game,” said Karn in the post-match press conference.  “T20 is all about momentum. We started well in the first six overs. That’s why we were in the game and won the game,” he added.

Talking about the wicket, Karn feels that it was not the usual wicket Bengaluru wicket. He said, “Wicket was a little bit slow. Not like it used to be in Bangalore before. But it was good for us that we bowled well from the start and got wickets in the middle. That’s more important.” READ: IPL 2017 Playoffs: To contribute in such manner for MI in Qualifier 2 is a great feeling, says Bumrah

Karn also revealed that he did not worry when he was not picked, but instead worked hard when kept out of the team. “It’s good for me. I am just working hard when I’m not playing. The main motive is when I get a game I need to perform for the team and the team wins. That’s more important for me,” Karn said.

MI will play Rising Pune Supergiant (RPS) in the IPL 2017 final on Sunday at the Rajiv Gandhi International Cricket Stadium at Hyderabad. 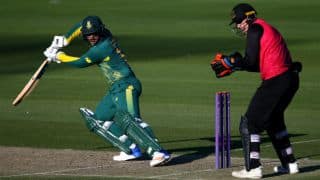