Kedhar Jadhav s splendid 69 powered Royal Challengers Bangalore (RCB) to a respectable total of 157 for 8 against Delhi Daredevils (DD), in the fifth game of the ongoing Indian Premier League (IPL) 2017. Opting to bat, RCB were off to a poor start with most of their batsmen struggling to get runs. But Jadhav had other plans, as he smacked 5 sixes and as many boundaries to score a 37-ball 69 and bailed his side out from a precarious position. RCB again missed the services of Virat Kohli and AB de Villiers and could not manage a solid start. However, it was a one-man show for RCB and the most impressive bowler for DD was their old wily, Zaheer Khan, finishing with 2 for 31 off his 4 overs. FULL CRICKET SCORECARD: Royal Challengers Bangalore (RCB) vs Delhi Daredevils (DD), IPL 2017 Match 5

RCB made an ordinary start with Shane Watson and Chris Gayle opening the innings. Watson hit a couple of boundaries in the first over from Zaheer and hosts got two more fours in the next over with new opening pair looking good. However, looking to clear the in-field, Gayle failed to hammer a full toss from Chris Morris outside the off-stump. He hit it towards mid-off, where Sanju Samson covered some part of the field and completed a brilliant catch diving to his right. FULL CRICKET BLOG: Royal Challengers Bangalore (RCB) vs Delhi Daredevils (DD), IPL 2017 Match 5

Mandeep Singh came in at No. 3, and started off with a boundary at the end of the fourth over. He hit two consecutive boundaries through cover off Pat Cummins, but the bowler had the last laugh. He dismissed him getting an inside edge off Mandeep s blade to crash onto the middle-stump. Mandeep paid the price of being over-aggressive, as he had made room by moving back a little to play his stroke.

Jadhav joined Watson in the middle with RCB looking to revive their innings. Jadhav started off with a six off Amit Mishra, but Shahbaz Nadeem pegged RCB back once again by removing Watson out of the equation. The Australian was stumped for a run-a-ball 24, studded with 4 boundaries.

Stuttering at 52 for 3 in 9 overs, RCB needed a strong partnership. Jadhav joined forces with Stuart Binny, who once again disappointed with the bat but stood with Jadhav for a brief period. Jadhav and Binny added 66 for the fourth wicket, with the former dominating the proceedings.

Jadhav handed Mishra his third most expensive over in IPL, collecting 24 runs off the leg-spinner in the 13th over. He continued with his onslaught against Carlos Brathwaite, hitting the second ball towards mid wicket for a boundary, but the next hit was the best stroke of the innings. On a delivery angling into the wickets, Jadhav moved away to make room. The big bat came ruthlessly on the ball, slapping it over cover for a fabulous six.

Jadhav kept hitting Brathwaite for more runs, hitting the Caribbean cricketer over his head for a four and a six in the 16th over.

Zaheer returned in the 18th over to put a brake on RCB s charge, running out Vishnu Vinod and then snaffling the big wicket of Jadhav. He changed the pace of the ball and inducing a mis-hit , leading to a simple catch for Morris. The last four overs leaked only 24 runs as DD managed to restrict RCB under 160.

Morris, however, was the pick of the bowlers with 3 for 21 in 4 overs. 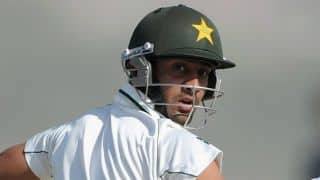 Usman Salahuddin: Grateful for have been given another opportunity to play for Pakistan 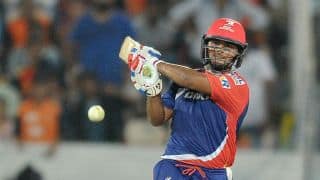