IPL 2017: Kieron Pollard underlines situations when ‘champions’ are made after Mumbai Indians’ win over Ro

The Caribbean cricketer turned the tables in his team s favour at M Chinnaswamy Stadium in Bengaluru on Friday.

Kieron Pollard, who was adjudged the Man of the Match for inspiring Mumbai Indians (MI) to a 4-wicket victory over Royal Challengers Bangalore (RCB) in the ongoing Indian Premier League (IPL) 2017 match 12, said situation like the one he found himself in makes champions. Pollard walked in to bat with Mumbai Indians tottering at 7 for 4 in a modest chase. The Caribbean cricketer turned the tables in his team s favour at M Chinnaswamy Stadium in Bengaluru on Friday. Chasing 143 to win, Mumbai Indians were rocked by a hat-trick from Samuel Badree the first of this season but Pollard helped Mumbai recover from the early blows. Full Cricket Scorecard, RCB vs MI, Match 12

Pollard joined forces with Nitish Rana (11) and Krunal Pandya (37 not out) to not only bail Mumbai Indians out of trouble, but also put them on the path to victory. Mumbai Indians recovered from a precarious position of 7 for 4 to go on to win the match by a handsome margin. Pollard stood between RCB and a win which was almost ensured by the hat-trick in the third over of Mumbai s chase. Pollard faced 47 balls and scored 70, and his innings included 5 sixes and 3 boundaries.

“I just thought these are situations when champions are made. I thought of that and struck to my strength, hit it down the ground. Personally I’ve never felt out of form. I’ve been hitting it well in the nets and these are the times you’ve to dig in,” Pollard expressed after the game ended in Mumbai Indians favour, according to IANS.

“Krunal [Pandya] came in and showed his maturity too. It was a matter of watching their bowlers. We decided that if we get a six or four off every spinner’s over, we will get close if we keep it ticking and not play any dot balls,” he added. 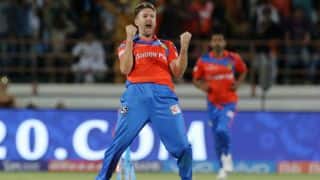