Kieron Pollard hit out at Sanjay Manjrekar over some of the comments that were made on-air by the Indian commentator.

Kieron Pollard, on late Sunday night, kicked up a storm on Twitter in what turned out to be an angry tweet in response to Indian commentator Sanjay Manjrekar’s poor choice of words on air. Pollard hit out at Manjrekar over some of the comments that were made on air, during the seventh match of the ongoing Indian Premier League (IPL) 2017. Pollard contributed with a run-a-ball 17 in Mumbai s thrilling win, which was sealed by Hardik Pandya on the penultimate ball against Kolkata Knight Riders (KKR), at Wankhede Stadium in Mumbai. The home side won the thrilling contest by 4 wickets. FULL CRICKET SCORECARD: Mumbai Indians (MI) vs Kolkata Knight Riders (KKR), IPL 10, Match 7

Mumbai Indians were in a precarious position when Pollard took the crease. To make matters worse, Pollard could not fire on all cylinders, leaving the other batsmen with a lot to do. Manjrekar, who was on air at the time when Pollard was in the middle, commented on the lines of Pollard not having the capability to go full throttle with a relatively new ball. As a result, Pollard took to Twitter and expressed displeasure.

Pollard does not have the brains to play early in the innings, said Manjrekar reportedly while Mumbai Indians were battling against KKR to register first win in IPL 10. After Mumbai achieved the victory, Pollard wrote directly to Manjrekar, u feel any positive can come out of your mouth bcuz u get pay to talk u can continue with your verbal diarrhea .. (sic)

In a couple of more tweets, Pollard let out his emotions and was soon joined in by compatriot Tino Best. Apparently, Best himself has been working as a commentator in England s domestic cricket.

Do you know how I get big so.. about BRAINLESS.. words are very powerful .. once it leaves u can’t take it back.. sins of parents fall on…

Best even got Kevin Pietersen involved in the episode in his tweet to Manjrekar.

Best added, Don’t worry I know how y’all feel about my ppl deep down inside always saying we stupid we don’t have sense piss off with that crap. (sic). 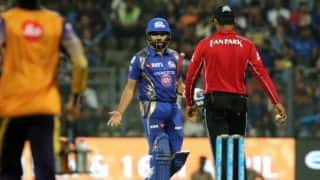