Kings XI Punjab (KXIP) made a confident start to Indian Premier League (IPL) 2017, winning their first contest against Rising Pune Supergiant (RPS) by 6 wickets at the Holkar Stadium in Indore. Chasing 164, KXIP showed no distress at any point in reply, with Glenn Maxwell leading his team to a win in his first game as a full-time captain. Maxwell cracked a rapid 20 ball 44, whereas useful contributions from Hashim Amla, Akshar Patel and even David Miller proved to be enough for KXIP to chase down the target set by RPS. Punjab won the fifth IPL 2017 game with 6 balls to spare. FULL CRICKET SCORES: Kings XI Punjab (KXIP) vs Rising Pune Supergiant (RPS), IPL 2017

KXIP managed to get the better of an explosive Rising Pune Supergiant top-order, with the heroes of their last win Ajinkya Rahane and Steven Smith being dismissed for cheap. On a dual-pace wicket which eased out for batting in the evening according to Smith, RPS made a shaky start as they were struggling at 71 for 4 in the 12th over before a 61-run stand between Ben Stokes (50) and Manoj Tiwary (40 not out) revived them to a competitive total. In their reply, Kings XI Punjab were off to a confident start in the chase of 164 to win. Manan Vohra and Hashim Amla added a rapid 27 runs for the first wicket, with the former taking the initiative early on. FULL CRICKET UPDATES: Kings XI Punjab (KXIP) vs Rising Pune Supergiant (RPS), IPL 2017

Amla got a boundary off the second ball in their chase, and got another in the next over from Dan Christian, with Vohra also following the suit. Vohra showed aggressive intent against Dinda by dancing down the wicket and hitting a straight six over the bowler s head, but a repeat of the same on the final ball of the third over turned out to be the case of wrong shot selection.

Vohra played it straight to Manoj Tiwary at deep midwicket, and Amla was joined in by Wriddhiman Saha, who perished after a lifeline by Christian off Ben Stokes. Saha looked aggressive during his innings, cracking 3 boundaries before Imran Tahir rattled his wickets with a delivery that came back in.

Amla then joined forces with Akshar Patel, who came out to bat ahead of several big hitters in the KXIP rank. The move certainly looked too ambitious at the beginning with the likes of Maxwell, Miller and Marcus Stoinis waiting in the ranks.

But Akshar did well to put up a 34-run stand with Amla for the third wicket. Akshar and Amla rotated the strike well, but the scoring shots were restricted. Against the run of play, Amla decided to go for a big hit, but he found Stokes at long-off. In the very next over 12th of the innings Tahir returned to jolt KXIP, removing Akshar for a 22-ball 24.

The two quick wickets did raise Rising Pune Supergiant s hopes, but were soon doused by Maxwell and Miller who took the game away for their opponents. Maxwell was belligerent among the two, not shying away from taking risks against the likes of Tahir as well as Rahul Chahar.

Maxwell cracked 4 sixes and 2 boundaries to signal rich form early on, but missed out on a deserving half-century in the opening game. His onslaught against the RPS bowlers certainly took them by surprise, as Maxwell’s innings was the only in the game which could be described as belligerent. Earlier, Stokes had scored a 32-ball 40 and Manoj Tiwary reached a 23-ball 40 not out. Miller scored 30 not out off 27 balls, studded with 2 sixes and 1 boundary. Miller’s approach was identical to that of Maxwell, but the KXIP captain proved to be more aggressive of the two. A 79-run stand for the fifth wicket between Maxwell and Miller saw KXIP home.

For RPS, Imran Tahir bowled yet another tight spell of 2 for 29 off his 4 overs, but did not find enough support from the other end. Chahar and Dinda claimed a wicket each.

Earlier in the afternoon, Stokes’ maiden IPL fifty and Tiwary’s innings of 40 not out pushed Rising Pune Supergiant to 163 for 6 in their 20 overs, after the big guns were removed for cheap. Ajinkya Rahane, Steven Smith and MS Dhoni were dismissed for a grand total of 50, which at the end proved to be one of the biggest reasons for KXIP’s win.

Man of the Match: Glenn Maxwell 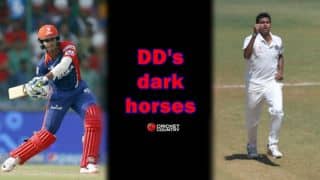