The execution from the bowlers has to improve. They have good plans going into the game, but it is about executing them in pressure situations."- Glenn Maxwell

KXIP skipper Glenn Maxwell speaking in the post-match presentation ceremony about what went wrong for his team. Maxwell said, We were a bit behind with the bat there. Let them get 188 which was far too many on that wicket. We gave away probably 30 too many. There were too many boundary balls and we did not sustain the pressure. They got away at the back end. It (the wicket) stayed slow and did not allow us to get going.

Maxwell further stated that his bowlers needed to get things tight and right in the death overs. In this game against DD, KXIP conceded 61 runs in the final 5 overs which led to DD to the 190-run margin.

Talking about his team s bowling effort, Maxwell said, The execution from the bowlers has to improve. They have good plans going into the game, but it is about executing them in pressure situations. Axar Patel continues to show he is a superstar in the game, his all-round prowess was brilliant and KC (Cariappa) had a good day, apart from that it was a dull night.

Having lost two consecutive games after getting to a good start,

KXIP got off to a good start in IPL 2017 managing to win 2 games on the trot. But now having lost the next two games, KXIP have been landed on 5th position in the points table. They will now play against Sunrisers Hyderabad on April 17 at the Rajiv Gandhi International Stadium, Hyderabad 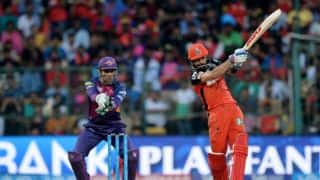