Royal Challengers Bangalore made one of the most horrible batting efforts witnessed in recent IPL history, and lost the game by 82 runs.

Kolkata Knight Riders (KKR) finally flexed their fast-bowling muscle in the ongoing Indian Premier League (IPL) 2017 tournament, handing out Royal Challengers Bangalore (RCB) their lowest-ever total of 49 also the lowest-ever total in the toournament’s history. Chasing a modest total of 132, Virat Kohli was handed his second first-ball duck in a space of a few months and none in the remaining side were allowed a double-digit score, as KKR s fast bowling arsenal wrecked havoc on the RCB batsmen to bowl them out for a mere 49. Chris Woakes, Colin de Grandhomme and Nathan Coulter-Nile claimed 3 wickets each, whereas Umesh Yadav snaffled 1. KKR did not even utilise any of their spinners as the fast bowlers earned them one of the most famous victories. FULL CRICKET SCORECARD: Royal Challengers Bangalore (RCB) vs Kolkata Knight Riders (KKR), IPL 10, Match 27

After Kolkata Knight Riders slipped from 52 for 1 in 4 overs to 131 all out in 19.3 overs, it looked like that the hosts had produced an embarrassing batting performance. But Royal Challengers Bangalore made one of the most horrible batting efforts witnessed in recent IPL history, and lost the game by 82 runs. A team boasting of some of the finest T20 batsmen were knocked over with splendid fast bowling, led by Woakes who claimed 3 for 6. FULL CRICKET BLOG: Royal Challengers Bangalore (RCB) vs Kolkata Knight Riders (KKR), IPL 10, Match 27

RCB’s total of 49 is now the lowest in the history of IPL. This is the first time any team has been bowled out for less than 50. RCB’s total of 49 in a mere 9.4 overs is also the first double-digit total by any team in the ongoing IPL. It must be remembered that RCB had their previous lowest score of 82 against KKR in the first edition of IPL. This is also the 10th lowest score in history of all T20 cricket.

Here is the list of lowest totals in IPL history:

De Grandhomme returned with the figures of 1.4-0-4-3 and Coulter-Nile finished with 3 for 21. Umesh bowled his heart out, but could get only 1 wicket.

The procession began when Kohli chased one outside off and edged it to the second slip fielder Manish Pandey off Nathan Coulter-Nile, who completed the catch after initial fumble. Kohli was seen throwing away his helmet as well as the bat in an angry gesture, and was involved in a discussion with one of the match officials complaining about some movement behind the sight screen.

Mandeep Singh was the next to be dismissed, caught at point for a 3-ball 1 with Umesh claiming his first wicket. This time, Pandey made no mistake as he claimed the catch without any fumble.

The next batsman to throw it away was AB de Villiers, going for his stroke on a short delivery which resulted in him getting a top edge. De Villiers dismissal brought RCB reeling at 12 for 3, with their chase in complete disarray.

Kedar Jadhav hit a couple of boundaries before mistiming a ball towards short midwicket, giving Chris Woakes a simple catch off Coulter-Nile.

Chris Gayle had done well to manage the heat initially, but the focus shifted on him with RCB running out of batsmen in a flurry. The burly left-hander battled for as many as 17 balls most faced by any RCB batsman before perishing to Woakes for a mere 7.

Man of the Match: Nathan Coulter-Nile 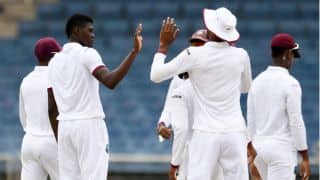