Krunal Pandya with the ball who ensured Gujarat Lions do not end up scoring a big total against his side Mumbai Indians in Match No.35 in IPL.

Last evening the Indian Premier League (IPL) 2017 saw one of the most exciting games this season one has witnessed. Mumbai Indians (MI), thanks to a brilliant super over from Jasprit Bumrah, toppled Gujarat Lions (GL) in their own den. Prior to Bumrah s heroics it was Krunal Pandya with the ball who ensured Gujarat Lions do not end up scoring a big total. Even while batting Krunal showed level-headedness in the end to tie the game for MI. Bumrah bowled a perfect super-over says Kishan after GL’ loss to MI

Speaking to IPLT20.com, Krunal labelled the win as one of his best win ever across levels. This would be one of the best, amongst the best. I have played a lot of games like this as well, not at this level at domestic level as well but this was like the best game so far, Krunal said.

Krunal was quick to call the win a complete team effort. He added, It was a total team effort, it was not that one individual played well. Like PP [Parthiv Patel] played really well. The way Malinga came back picking up two important wicket for us and well as Bumrah bowled really. Bhajjipa[Harbhajan Singh ] really bowled well in between. Batting again Rana [Nitish Rana] and PP played really well.

About the chase he elaborated saying, “We knew that the asking run-rate was not that far, we were away two-three big shots only. But wicket was also not that easy that you just go there and hit. I was making sure that I stretch the game till the 20 over and I see how it goes.

Krunal also talked about how he has curbed his aggressive nature on the field. “No, I am learning actually previously I was really aggressive on the field. Still I am, but I make sure I control my emotions I see what are the controllable things at that current incidents whether I am bowling or batting,” Krunal explained.

Krunal praised the Bumrah for his fantastic super-over as well. Basically like this game Bumrah bowled really well, so he was more confident so I guess we went with them. And like he bowled a terrific super over, like he bowled 8 balls with 2 no-balls and still they scored around 5-6 runs. It was great over by him, he is known for that yorkers at the death overs. That’s his skill and he does it day-in and day-out, Krunal concluded. 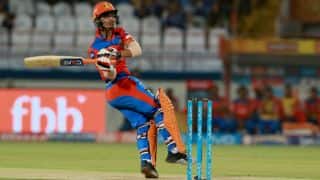