The live cricket streaming of the Kolkata Knight Riders v Sunrisers Hyderabad IPL 10 match no. 14 will be available on Hotstar.

When Kolkata Knight Riders (KKR) and Sunrisers Hyderabad (SRH) take on each other in Match no. 14 of Indian Premier League (IPL) season 10 on Saturday, they will have an eye on the top spot in the points table. Whichever team from the two KKR, placed second, and SRH, placed third wins the game, will replace Mumbai Indians (MI) and go on top on the virtue of better net run-rate. The live cricket streaming of the match will be available on Hotstar. Also, the live telecast of the match will be available on Sony Six and Sony Six HD in English commentary, whereas Sony ESPN and Sony SPN HD will telecast it in Hindi, Bengali, Tamil and Telugu commentary. Also, SET MAX would telecast it on Hindi commentary. LIVE CRICKET SCORECARD: Kolkata Knight Riders vs Sunrisers Hyderabad Match 14

Both the teams are in red-hot form, having lost just a single match from their three outings. The match KKR lost against Mumbai at their fortress Wankhede was a close affair and could have gone either way. Same happened to SRH, who lost to the Mumbai Indians at Wankhede, as they too were not exactly thrashed in the game. But barring that loss, the two teams have been clinical in their approach on the field. SRH s charge has been led by Rashid Khan with the ball and skipper David Warner, Moises Henriques et al with the bat.

KKR, on the other hand, have seen their skipper Gautam Gambhir step up on the batting front. Even after losing the explosive batsman Chris Lynn, side has coped well with Sunil Narine surprising the opponents with his strokeplay. The team has gained more strength with Umesh Yadav s successful return in the previous home game against Kings XI Punjab.

The head-to-head record favours KKR as they won both the games last season before SRH dealt the knockout punch in the Eliminator. Overall, the two teams have met 9 times in the history of IPL, with KKR emerging winner on 6 occasion and SRH winning the remaining 3. At Kolkata, KKR remain unbeaten against the visitors, as they have won all 4 games against them at the Eden Gardens. 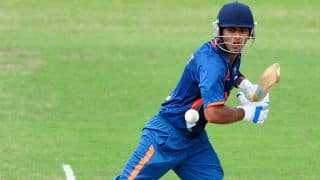