Sunrisers Hyderabad (SRH) will square off with Kolkata Knight Riders (KKR) in Eliminator of Indian Premier League (IPL) 2017, at M. Chinnaswamy Stadium. The live cricket streaming of the match will be available on Hotstar. Also, the live telecast of the match will be available on Sony Six and Sony Six HD, along with Hindi, Bengali, Tamil and Telugu commentary on Sony ESPN and Sony ESPN HD, while SET MAX will telecast exclusively in Hindi. In the previous edition, Sunrisers Hyderabad had beaten Kolkata Knight Riders in the Eliminator at Feroz Shah Kotla Stadium in Delhi, eventually lifting the title. In this season so far, both teams have won a game each at their respective home grounds in the league stage. Full Cricket Scorecard: Sunrisers Hyderabad (SRH) vs Kolkata Knight Riders (KKR), IPL 2017, Eliminator at Bengaluru

The dark clouds are looming over Bengaluru. This means, if the match is called off due to rain, Sunrisers Hyderabad, having a point more than Kolkata Knight Riders, will take on Mumbai Indians in Qualifier 2 at the same venue. Gautam Gambhir and co. will be praying to the rain gods to keep the clouds away. However, there is also a possibility of a short contest between the two sides.

The forecast suggests that there will be thunderstorm during the match time, but there is no indication of incessant rain. That said, the fans will be hoping for an action-packed evening, praying along with Kolkata Knight Riders.

Ashish Nehra has been ruled out of the remainder of the tournament, while Yuvraj Singh was rested in the previous game due to a sore thumb. 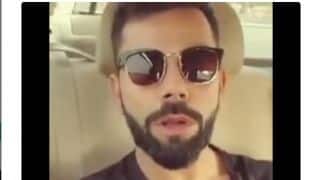