This is the first match of the Indian Premier League (IPL) season 10 and reigning champions Sunrisers Hyderabad (SRH) will take on Royal Challengers Bangalore (RCB) at the Rajiv Gandhi International Stadium, Uppal, Hyderabad on Wednesday. The live cricket telecast of all the matches of IPL 2017 will be available on Set Max, Sony Six, Sony Six HD, Sony ESPN and Sony ESPN HD. The live online streaming of all the IPL 2017 matches will be available at ESPN, SonyLIV and Hotstar. In the absence of regular skipper Virat Kohli, Shane Watson will lead RCB against David Warner s SRH in the opening game. This is the first time two non-Indian captains are leading the two sides in the first match of IPL. FULL CRICKET SCORECARD: Sunrisers Hyderabad vs Royal Challengers Bangalore, Match 1 at Hyderabad

RCB were hit by a string of injuries way before IPL 10 started. Kohli ruled himself out from the initial few matches due to his shoulder injury. While AB de Villiers, too, will miss the first few fixtures, KL Rahul has been ruled out from the entire season. Domestic star Sarfaraz Khan has also been ruled out due to injury. With so many players injured, the much famed RCB batting looks a bit bleak. However, Watson and Chris Gayle still continue to be in the side, adding to the star quotient. Also in focus will be Tymal Mills with the ball.

SRH have no such injury issues in the side but will miss their dependable pacer Mustafizur Rahman who is on national duty. Warner will be the backbone of their batting and it will be interesting to see how he plans his attack for the inaugural game. Afghanistan players Mohammad Nabi and Rashid Khan are also among the star attraction. 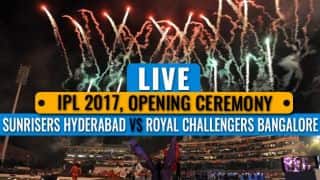