Kolkata Knight Riders batsman Manish Pandey, who made a 47-ball 81 to help his side reach 178, blamed poor death-bowling as one of main reasons of the defeat against Mumbai Indians.

Kolkata Knight Riders (KKR), who looked on track to win their second game in a row, were denied jubilation as Mumbai Indians (MI) beat them by 4 wickets in a nail-biting finish. Match no.7 of the Indian Premier League (IPL) 2017 turned out to be a humdinger of a contest, with Mumbai thrashing 53 runs in the last 3.5 overs, courtesy Nitish Rana (50) and Hardik Pandya (29*). Kolkata batsman Manish Pandey, who made a 47-ball 81 to help his side reach 178, blamed poor death-bowling as one of main reasons of the defeat.

“Even in the first game, I thought we struggled with our death bowling. We can improve a little more here. It’s two games in a row now and it’s high time we start thinking and have some mind and thoughts in the meetings as well,” Pandey said in his post-match conference.

He further went to elaborate, “If you’re hitting the yorkers consistently then it’s obviously difficult for any batsman to connect. They missed a few and even we missed a few. That’s what happened and I thought they played really well. As I said, we’ll have to work a little more in the end about the death-bowling and we should overcome this.”

Trent Boult, in particular, has struggled for Knight Riders leaking runs in the death-overs against both Gujarat Lions and Mumbai, going for 25 and 28 runs in 18th and 20th over respectively.

Pandey was quick to praise knocks by Rana and Hardik as well. “It looked like we were going to win this one, but Hardik and Rana played really well in the end to get those runs. We could have actually bowled a little bit better with a little more plan,” Pandey added. IPL 2017: Jayawardene praises Rana, Hardik after MI win over KKR

He also added that dew at Wankhede took its toll on the result of the game. “Dew definitely plays a big role. That ball starts to skid on to the bat well, even off the field it goes really fast. There’s always an advantage if there’s dew, you can chase better,” he said.

Finally speaking about his own batting, Pandey added that he treated every ball as it came his way and looked to stay in the middle throughout the innings.

“It was definitely satisfying. From where I started, I wanted to finish how I finished today. I was just taking it one ball at a time, one over at a time. Even talking to the next batsman whoever was coming. That’s what I did and eventually it was important for me to stay at least until the 19th over, or the 20th over. That’s where I can play my game and finish matches at ease,” he concluded. 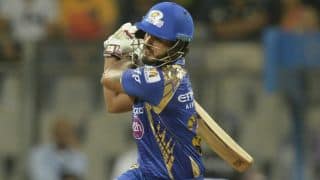