Manish Pandey s 81 not out propelled Kolkata Knight Riders to a competitive total of 178 for 7 against Mumbai Indians.

Manish Pandey s 81 not out propelled Kolkata Knight Riders (KKR) to a competitive total of 178 for 7 against Mumbai Indians (MI) in the seventh match of the ongoing Indian Premier League (IPL) 2017. KKR stuttered in the middle overs after a strong start, but Pandey held the innings together with a resolute innings, which included late fireworks. Chris Lynn continued to fire at the top, but a brittle middle-order performance put KKR s position in jeopardy before Pandey came up with a smart innings to lift his side in their second match. Mumbai Indians (MI), who lost the opening match of IPL 10, will have a mountain to climb against a disciplined KKR bowling now. FULL CRICKET SCORECARD: Mumbai Indians (MI) vs Kolkata Knight Riders (KKR), IPL 10, Match 7

Pandey smacked 5 sixes and as many fours to score 81 not out off 47 balls. He added 44 runs with Suryakumar Yadav to resurrect a faltering innings and opened up in the final two overs to collect another 33 runs. Pandey s onslaught included 3 sixes and 1 boundary off the last two overs as KKR seized momentum going into the innings break. Krunal Pandya was the pick among the bowlers with 3 for 24 off 4 overs, whereas Lasith Malinga claimed 2 for 36 in his comeback game for Mumbai Indians. FULL CRICKET BLOG: Mumbai Indians (MI) vs Kolkata Knight Riders (KKR), IPL 2017 Match 10

Lynn once again outscored Gambhir, starting off with a boundary in the first over past mid-on. He hit a boundary again in the next over, off Mitchell McClenaghan, past short fine-leg but survived a call for caught-behind. Lynn attempted to slog the ball but missed to connect, as Parthiv Patel and McClenaghan went up together in appealing for a catch, which was turned down.

Jasprit Bumrah was brought into the attack in the third over, and the bowler struggled for rhythm early on. He bowled two no-balls (one for height and the other for over-stepping), but Gambhir could make most of the free-hit only once. The penultimate ball was hit past point for a boundary, followed by another beating the third-man.

It was Krunal Pandya who applied brakes on KKR s charge, in the fifth over when he accounted for Gambhir and Robin Uthappa. Gambhir was caught in deep square-leg for a 13-ball 19, and Uthappa fell when the Pandya brothers combined to take the second wicket. Hardik took a regulation catch at deep midwicket when Uthappa mistimed the fifth ball of the over.

Mumbai Indians had further success in the eighth over when Bumrah returned to remove the dangerous Lynn out of equation, trapping him in front of the wickets for a 24-ball 32. Lynn struck 3 boundaries and 1 six in his innings.

Yusuf Pathan and Manish Pandey got together but struggled to maintain the momentum. Harbhajan Singh sent down two tight overs off which only 8 runs were taken, and Krunal gave away 14 runs in his two-over spell and got Pathan caught by Hardik at long-off for 6.

Pandey found company in Suryakumar Yadav, as the two provided KKR some stability. Pandey was more aggressive of the two, hitting a six and a four off Bumrah in the 16th over. Suryakumar did well to add 44 runs for the fifth wicket with Pandey before falling to Malinga in the 17th over.

Pandey’s late hitting provided impetus to the visiting side. He picked up the slower balls from Malinga with ease and collected 23 runs off McClenaghan in the last over. 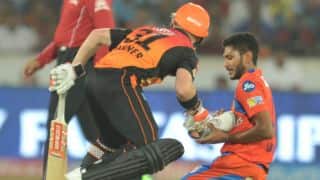