Dhoni, who was adjudged Man of the Match, spoke about RPS game plan of how they negated the threat of Afghanistan-sensation Rashid Khan who has taken 7 wickets in the tournament so far.

MS Dhoni, played splendid innings against Sunrisers Hyderabad (SRH), helping Rising Pune Supergiant (RPS) to seal a victory on the last delivery of the ongoing Indian Premier League (IPL) (IPL) 2017. Chasing 177, RPS went past the finish line, keeping 4 wickets intact. Dhoni, who had not been amongst runs in IPL 2017, smashed an unbeaten 61 of just 34 deliveries which included 5 boundaries and 3 sixes. Dhoni, staying true to his role of a finisher, ended the game by smashing a boundary off the last delivery of the game, giving RPS the much-needed victory in the 10th edition of IPL. FULL CRICKET SCORES: RPS vs SRH, Match 24

Dhoni, who was adjudged Man of the Match, spoke about RPS game plan of how they negated the threat of Afghanistan-sensation Rashid Khan who has taken 7 wickets in the tournament so far. Dhoni was quoted as saying by PTI, It was a difficult one but it was important that, since we had strikers towards the end, that we take Rashid out of the game. That was his last over. It’s not a pretty big ground, and there was a pretty strong breeze. That was the plan.

When Dhoni came out to bat, the asking run-rate (RR) was around 9 but quick wickets saw the required run-rate shooting to almost 15 per over in last 2 overs. Talking about the same, he said, It was slightly above average, the run rate. You can’t always pull it off. Manoj’s contribution was very important. In modern day cricket, there’s no run rate that’s high. It boils down to how the opposition bowlers execute. It’s about who handles the nerves well. Overall I feel that last four overs you can get close to 60 runs provided the opposition plays badly and you play well.

With this victory, RPS have now jumped up to No. 4 spot in IPL 2017 points table with 6 points and they will be playing their next game against Mumbai Indians (MI) at the Wankhede Stadium, Mumbai on April 24. 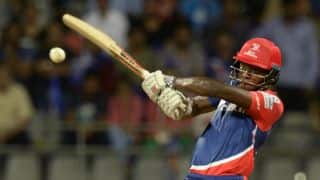