Mumbai Indians (MI) made as many as six changes to their playing XI in their last league match in Indian Premier League (IPL) 2017 against Kolkata Knight Riders (KKR) on Saturday. Yet the Rohit Sharma-led side emerged victorious against a strong KKR side, thus finishing up as the table-topper in IPL 10. In doing so, MI also became the first team in the history of T20 cricket to win 100 games. In their 10th year of existence in IPL, Mumbai surpassed other teams like Delhi Daredevils (DD), KKR, Kings XI Punjab (KXIP) and Royal Challengers Bangalore (RCB), who have been around for the similar period, to become the first team in the world to reach to the landmark.

During this period of 10 years, Mumbai Indians have played 177 matches (including the game against KKR on Saturday) and won 100 of them. These matches include the games played in all editions of IPL and the now-scrapped Champions League T20 (CLT20).

MI brought up their 100th win at Eden Gardens, Kolkata. The ground has been a lucky one for them as they had registered their first ever win at the very venue. It does not end here. KKR have won both their IPL titles at this ground.

After finishing at the top in IPL 10 and earning two shots to the final, MI have put themselves in great position to lift the IPL crown for the record third time. The final of IPL 10 will be played in Hyderabad on May 21. 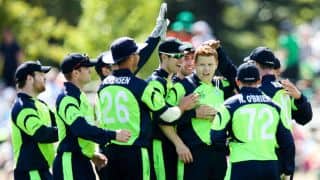