Sunrisers Hyderabad need 159 to win against Mumbai Indians in match 10 of IPL 2017.

The previous match of Indian Premier League (IPL) 2017 had witnessed veterans Zaheer Khan and Amit Mishra take centrestage and scalp three wickets each. In match 10 of IPL 10, old warhorse Harbhajan Singh rose to the challenge. He caught the Sunrisers Hyderabad (SRH) batsmen by the throat and choked them for runs, taking 2 wickets and conceding only 23 runs off his 4 overs. Though David Warner put Mumbai Indians (MI) on the back-foot with a breezy 49, his side managed only 158 for 8 at Wankhede Stadium in Mumbai. LIVE CRICKET SCORECARD, Mumbai Indians vs Sunrisers Hyderabad Match 10

In their 100th match for MI, Rohit Sharma and Lasith Malinga got most things right in the first innings. While Rohit called it right at the toss, Malinga was at his best keeping the opposition at bay with his sling-shot action. After amassing only 5 runs off the first two overs, openers Warner and Shikhar Dhawan (or the David Dhawan duo) took SRH to 34 for 0 after the end of batting powerplay. Though Dhawan could score only 7 from 15 balls, he accelerated as time went on, and later picked up 5 boundaries.

As the field was spread, Warner made full use of the situation and scored 2 fours and a six off Mitchell McClenaghan. Picked up for his wicket-taking ability, McClenaghan struggled to even keep a lid on the runs. However, there was an interesting episode towards the end of over.

Warner forgot to retain his end after hitting a boundary off the last ball of the over. Instead, he strolled to the non-striker’s end just in case the ball did not reach the boundary line, making sure he at least got his single. However, the batsmen did not switch ends. In the next over, when Jasprit Bumrah came to bowl, Warner faced the first ball when Dhawan should have been at the strike. The umpire overlooked the error, and the game went on.

Warner continued his rampage. He switch-hit Harbhajan’s off-breaks over the off-side field. Nevertheless, Harbhajan scaled up his pace when he saw Warner switching stance. The ploy paid off, as Parthiv Patel dove to pluck Warner’s top-edge. The scorecard read 81 for 1 after 11 overs.

The stage was set for the middle-order to go all guns blazing. A score of over 160 was on the cards, but MI bowlers bowled well as a cohesive unit and took 7 more wickets in the remaining 9 overs.

Hardik Pandya, McClenaghan, and Malinga took a wicket each, but it was Bumrah who upped the ante and scalped 3 wickets while going for a run-a-ball. Apart from Ben Cutting, no batsmen from Nos. 3 to 9 reached double-figures. 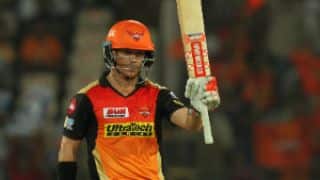 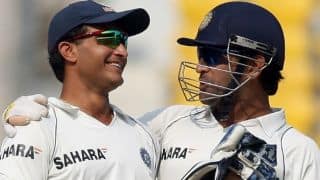