Mumbai Indians need 143 to win against Royal Challengers Bangalore in match 11 of IPL 2017.

Royal Challengers Bangalore (RCB) dropped stand-in captain Shane Watson against Mumbai Indians (MI) as soon as Virat Kohli was in the best of his fitness. So far, in Indian Premier League (IPL) 2017, RCB have won only one of their three matches. Hence, Kohli’s return as both captain and batsman will boost their morale. All the same, he did not disappoint the RCB fans, scoring a resolute half-century in his comeback match his first after the effortless double-ton against Bangladesh in one-off Test. Riding on his knock, RCB set up 143-run target at M Chinnaswamy Stadium in Bengaluru. Full Cricket Scorecard, RCB vs MI, Match 12

Rohit Sharma prefers MI chasing targets only on tracks that favour the team batting second. They had dished out a similar strategy in the previous season. It worked wonders then as well as in the last match against Sunrisers Hyderabad (SRH).

MI, however, played without the injured Lasith Malinga. As a result, Mitchell McClenaghan, who gave away 129 runs for 3 wickets so far, got another nod, but he made amends for his poor show by displaying figures of 4-0-20-2 against the batting-heavy RCB. In his four-over quota, he conceded only one boundary as well as got the better of Kohli for 62 and Madeep Singh for duck.

Gayle started off slow. He needed another 25 runs to become first player to complete 10,000 runs in T20 cricket, but he agonisingly fell short by 3 runs.

Kohli, along with AB de Villiers, tried to resurrect the innings. MI, on the other hand, strangled the duo, not giving away easy runs. Kohli may have struck gold in his comeback match, but Gayle and de Villiers could add only 41 off 48, thanks to Hardik Pandya’s remarkable bowling.

After the fall of Kohli’s wicket, RCB kept losing wickets at regular intervals. Kedhar Jadhav, their finisher, was fell short of the crease while taking a quick run. He went for a mere 9. With the top four batsmen back in the dugout, RCB’s middle-order looked rather fallible.

Mandeep, who had opened the innings in their opener, came at No. 6 and went for a first-ball duck.

Things did not get better for RCB, as they scored only a boundary in the last 32 balls losing 4 wickets.

Barring Tim Southee and Jasprit Bumrah, the other fours bowlers bowled at an economy of under 6. 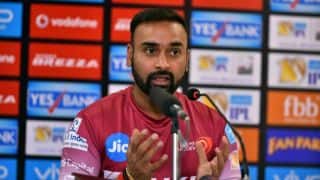