Chasing only 132 runs to win, Nathan Coulter-Nile along with Umesh Yadav downed the Royal Challengers Bangalore to 24 for 4.

Royal Challengers Bangalore (RCB) succumbed to Kolkata Knight Riders (KKR) in Match No. 27 of the Indian Premier League (IPL) 2017 at Kolkata on Sunday. In desperate need of a win, RCB faced the wrath of Nathan Coulter-Nile and Co., who ran past their much illustrated batting line-up. Chasing only 132 runs to win, Coulter-Nile along with Umesh Yadav downed the visitors to 24 for 4, before Chris Woakes and Colin de Grandhomme cleaning up the remaining batting line-up. Woakes, who returned with figures of 3 for 6 spoke in length about the game in general to IPLT20.com after the match. FULL CRICKET SCORECARD: Royal Challengers Bangalore (RCB) vs Kolkata Knight Riders (KKR), IPL 10, Match 27

Speaking about KKR’s win, Woakes opined, “Yeah, unbelievable win, I think when you.. at half time we obviously were well below par, we thought it was. But then again a great opening spell brought us back in the game. Coult and Umesh at the other end, get their big three dogs at the top. You know we got a chance. So yeah it’s a great win. Very very pleased.”

Waokes spoke how wonderful it was seeing Coulter-Nile exhibit his bowling skills in the middle. “Well, you could tell that he [Coulter-Nile] is in good rhythm, hitting the pitch very hard and obviously moving the ball around. You got the ball swinging. I suppose getting Virat first ball, boosted his confidence. And since then on I suppose you just hit your areas and hopefully wickets come but you know watching him it was a great opening spell of T20 bowling,” Woakes stated.

Woakes, who got Chris Gayle’s wicket, said that his heart wasn’t pounding when Coulter-Nile took the catch. “Ah, my heart wasn’t pounding, I am surely his might have been. Ah, no he’s got safe pair of hands so you know I was hoping 99 per cent he was going to take it,” Woakes explained.

“Yeah, it definitely offered little bit to the seamers. I think probably the first time since we ‘been here. It offered good pace and carry. The ball swung a bit at the start which obviously helped but still got to put the ball in the right areas,” Woakes concluded speaking about playing at Eden Gardens pitch last evening. 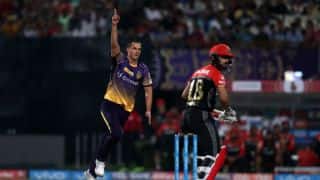 IPL 2017: 'Just wanted to bowl good balls', says Nathan Coulter-Nile after his ‘Man of the Match’ show for KKR against RCB