Kolkata: Kolkata Knight Riders (KKR) CEO Venky Mysore said that that franchise will only comment on pacer Umesh Yadav‘s initial availability on Friday, and also said there was no official word yet on its pacer Umesh Yadav’s unavailability. “There’s nothing official I heard. I also read the reports. Until, I heard something official from BCCI, there’s nothing we cannot comment,” KKR CEO Venky Mysore told reporters. “If there’s any truth, a statement should come out soon. I also read a couple of days ago that there’s some ‘workload management’… But we are not aware of any such [BCCI] directive, it may be a figment of somebody’s imagination,” Mysore said. Zaheer Khan: Umesh Yadav should play more matches to keep himself fit

The Indian pacer played a key role in India’s 2-1 bounceback win in a four-match Test series against Australia to regain the Border-Gavaskar Trophy. He has bowled a staggering 355 plus overs. According to reports, the series had taken a toll on some of the key Indian players who would miss a few matches of the IPL. “The good news with our team is all our bases are covered, in case of any eventuality. He’s a top player [Yadav], let’s wait and see what comes out officially. Then we can comment something concrete without being speculative.” IPL 2017: KL Rahul, Ravichandran Ashwin, Murali Vijay set to miss out

All KKR’s overseas recruitment including the likes of Trent Boult, Chris Woakes, Nathan Coulter-Nile, coach Jacques Kallis were in transit and would join the team in 72 hours, he added. “There were some Visa issues as a new process wanted two letters one from Ministry of sports and the other from BCCI. But it’s sorted now.” Bangladeshi allrounder Shakib Al Hasan, who’s playing in Sri Lanka would join before their tournament opener against Gujarat Lions in Rajkot on April 7.

“He is playing his last match on April 6 and would just be in time for the match,” he said. Talking to reporters after a practice match at Eden Gardens, he had special praise for the ground conditions. “Eden wicket looks brilliant. Outfield is world class. It should be a contender of the best ground of the tournament. It will be entertaining.” The team leaves for their away match on April 4. 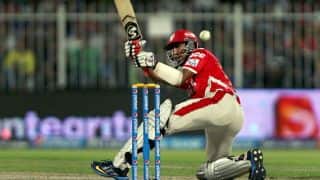