IPL 2017: No television commentary in Kannada

IPL 2017: No television commentary in Kannada

The English feed will be available on Sony SIX channels and the Tamil, Telugu, Bengali and Hindi language feeds on SONY ESPN channels.

Sony Pictures Network on Wednesday clarified that there will be no television commentary in Kannada for the coming Tenth Indian Premier League (IPL). “We would like to clarify that this year IPL will be telecast only in English, Hindi, Tamil, Telugu and Bengali. Kannada is not one of the telecast languages for IPL,” said an SPN spokesperson. The English feed will be available on Sony SIX channels and the Tamil, Telugu, Bengali and Hindi language feeds on SONY ESPN channels. Sony MAX will exclusively broadcast the Hindi feed, the company said. The tournament is being held from April 5 to May 21. READ: CoA: Saurashtra sought IPL 2017 funds despite having INR 250 crore plus in bank

A total of eight reams will go head-to-head in the cash rich tournament. The first match will be between last years’ finalists Royal Challengers Bangalore (RCB) and Sunrisers Hyderabad (SRH) on April 5 at Hyderabad. SRH had beaten RCB in the final in 2016 to claim their maiden crown. It is speculated that RCB skipper Virat Kohli might miss the opening stages of the tournament due to a shoulder injury. Kohi had injured himself while fielding in the third Test between India and Australia at Ranchi and consequently missed the fourth Test at Dharamsala. READ: IPL 2017 revised Schedule: Fixture, Dates, Match Timings and Venue Details

However, one of the biggest news going into the tournament is that MS Dhoni has been replaced by Steven Smith as the Rising Pune Supergiants (RPS) captain. As a result, this will be the first season where Dhoni will play as a non-captain. Dhoni led RPS in 2016, which was the franchise’s first season in the IPL. Prior to that, Dhoni has led Chennai Super Kings (CSK) to the IPL title on two occasions. 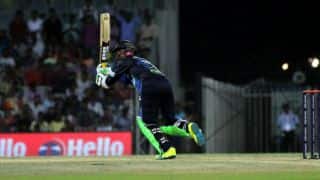