A slow wicket saw the KKR bowlers ruling the innings with comeback man Nathan Coulter-Nile ending with figures of 3 for 20 and also bagging the Man of the Match award.

Kolkata Knight Riders (KKR) eased to Qualifier 2 of Indian Premier League (IPL) 2017 in a rain-marred clash against Sunrisers Hyderabad (SRH) at Bengaluru. A slow wicket saw the KKR bowlers ruling the innings with comeback man Nathan Coulter-Nile ending with figures of 3 for 20 and also bagging the Man of the Match award. If Gautam Gambhir nailed it with his batting heroics, the SRH batsmen struggled to find their way in the first innings. Coulter-Nile also took a blinder of Chris Jordan and never thought it was a difficult task. However, Coulter-Nile has never played against Mumbai Indians (MI) this season and looks forward to face the pace-heavy attack of the side in Qualifier 2. FULL CRICKET SCORECARD: Sunrisers Hyderabad (SRH) vs Kolkata Knight Riders (KKR), IPL 2017 Playoffs, Eliminator at Bengaluru

Speaking to iplT20.com / BCCI, Coulter-Nile surprisingly was unaware about KKR s record in IPL and quipped, KKR had a 10-year celebration the other night that was the first time I found out that we have won the title twice. So it is part of the history I guess. He was also glad to claim a three-wicket haul in conditions that were not favouring the batsmen, I guess I was lucky. It was not a wicket you could hit freely. I picked a couple of lucky ones. The boys bowled fantastically. We got the rewards for them as well.

Coulter-Nile was hit on his helmet during the clash against Rising Pune Supergiant (RPS). Since he has missed quite a few games for KKR ahead of the eliminator, It was a tough one. I did not understand what was going on after being hit. It was not much of a rehab. I was not playing in the nets ahead of the eliminator. But the moment I woke up, I felt good and put my hand up for selection.

The best of SRH batsmen were gone cheaply and Coulter-Nile picked a crucial one of Kane Williamson. Speaking of which, Coulter-Nile added, We came out and tried to play quite reserved. It was a kind of a wicket where it was hard to keep going. After the time-out, Williamson and Warner had intent. It just looked to me that Williamson wanted to go leg-side. So whenever it came to leg I wanted to take him further through the way to the off-side, which is one of the hardest thing to do on that wicket.

KKR will now be playing against MI, against whom they are yet to fire this season. Coulter-Nile has not played a single game against MI in IPL 10 and looks forward to face the challenge, They have a world-class deck. Obviously Bumrah, Malinga are the best closers in the game. Plus McClenaghan is still going quite well, taking wickets. They have a completely different bowling attack to what we had to face in the previous games. I have not played them yet. So hopefully we can bring something new up against them. If it is the same sort of wicket, it is going to be slow. It is also important who bats better. 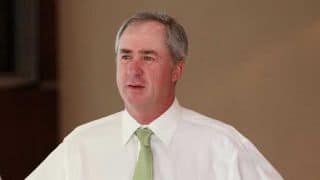