DD are currently in the seventh spot in the IPL 2017 table, with just four points from seven matches.

Sam Billings has been named in the England squad for the upcoming ICC Champions Trophy 2017. He is currently a part of the Delhi Daredevils (DD) squad, where Rahul Dravid is the mentor. DD are currently in the seventh spot in the IPL 2017 table, with just four points from seven matches. Billings says Dravid helps with tips about having the mental strength to cope with international cricket. Billings has scored 138 runs from five innings in this edition so far, as his good form for England has been carried into IPL as well. England and Delhi Daredevils will hope that he carries on showing similar form. Full Cricket Scorecard, Rising Pune Supergiant vs Kolkata Knight Riders, IPL 2017, Match 30

Revealing details of what Dravid tells him, Billings says, “I think it’s more about the mental side of the game. It is not necessarily a technique thing. To play international cricket, in any case you need a solid enough technique to get to that point. It’s about the mindset. He speaks about having that patience so that you can catch up towards the end, just chatting to him about cricket,” Billings told PTI during an interaction.

“What a great bloke he [Dravid] is. Easy to chat to. He chats about the mental side of the game, dealing with pressures on and off the field. He talks about different options, calculating which bowlers you can take down, simple things. People think it’s always gold dust, but sometimes it’s about just chatting, every now and then.”

Billings also revealed how Dravid has helped him out in tackling spinners. “Rather than batting on a decent track, Dravid just moves the stumps back so that the ball is pitching on the rough more. It’s turning a bit more. He is always trying to push your game to the next level. He is indeed a great man to have,” Billings said. 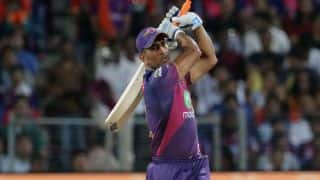