Earlier this month, Rashid Khan and Mohammad Nabi claimed another first after being snapped up in the CPL auction, for USD 60,000 and 90,000 respectively.

New Delhi: Eighteen-year-old Afghan sensation Rashid Khan can’t wait to start his maiden stint in the IPL with Sunrisers Hyderabad (SRH), where he will be sharing the dressing room with his childhood hero Yuvraj Singh. The last three months has been a “dream” for leg-spinner Rashid, who alongside senior teammate Mohammad Nabi, became the first among equals from the war-torn nation to be bought by an IPL franchise during last month’s auction.”A lot has happened over the last three months. It has been enjoyable,” Rashid, who is busy playing the series against Ireland at Afghanistan’s “home ground” in Greater Noida, tells PTI. Laxman exclusive: IPL auctions are all about targeting specific skill-sets

Rashid says the feeling that he will be sharing the dressing room with likes of Yuvraj, David Warner, Kane Williamson and Shikhar Dhawan in less than a fortnight is yet to sink in. The IPL begins on April 5.”IPL is the biggest league in the world, much bigger than playing associate cricket. I have started working harder ever since the IPL auction. It feels unreal that I will be sharing the dressing room with the players, I have grown up watching on television,” he gushes.What is that one big name he is most excited about meeting?

“I have been a huge Yuvraj fan since childhood. I really like his aggressive style. Hopefully, I will get to spend time with him and get an insight into his cricketing knowledge. It will also be very special to be with support staff comprising former players like Tom Moody, VVS Laxman and Muttiah Muralitharan. I spoke to Moody sir after the auction. He welcomed me into the squad,” says the Nangarhar-born cricketer, who aspired to play for the country after watching Afghanistan play their first World T20 in 2010. Rashid has been on a roll since the Rs 4 crore payday at the IPL auction in February.

Earlier this month, he and Nabi claimed another first after being snapped up in the CPL auction, for USD 60,000 and 90,000 respectively. Hours before the auction in the Caribbean, Rashid had picked up five wickets in nine balls in a T20 against Ireland at the Greater Noida Sports Complex Ground. A week later, he returned with figures of 6 for 43 in an ODI against the same opponents. Known to fox the batsmen with his googly and accurate quicker ones, Rashid has modelled himself on Pakistan star Shahid Afridi. His favourite Indian player is none other than M S Dhoni. IPL Auction 2017: Rashid finds it hard to believe to be bought for INR 4 crores by SRH

He was playing in Zimbabwe when the IPL auction took place. The leggie and Nabi got up early to watch the auction and he had heart in his mouth when leading South African spinner Imran Tahir went unsold. “I thought if a bowler like Imran Tahir went unsold, I had no chance. But then luck was on my side and the bidding ended where no one would have thought. We (Afghan cricketers) were just hoping to get into IPL to be honest. The price tag was not in our minds at all. It is also great that Nabi will get to play for the same franchise,” says the path-breaker, who is looking forward to extract maximum out of his maiden experience, irrespective of whether he gets to play or not.

Busy with non-stop cricket, Rashid has not got the time to think how he would spend the fortune.”Only when I get back home, I can figure what to do with the money.”He is among the many die-hard Bollywood fans in the Afghanistan squad and speaks Urdu as fluent as his mother tongue. 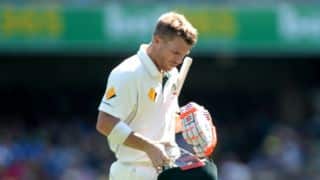