With this win, RPS have now climbed to the third spot in the points table with 7 wins from 11 games, while KKR continue to be at the second spot, being ahead on the NRR with same number of wins.

Rahul Tripathi, an unknown commodity till barely a month back, further enhanced his already-growing reputation when he hammered a classy 52-ball 93 in front of a 59,000 odd fans to sink the Kolkata Knight Riders (KKR) in their fortress, Eden Gardens. Chasing 156 to win, the Rising Pune Supergiant (RPS) got over the line losing 6 wickets and with 4 balls to spare. Their innings was all about Tripathi, as the youngster hammered 9 fours and 7 sixes during his knock, narrowly missing out on a well-deserved hundred. With this win, RPS have now climbed to the third spot in the points table with 7 wins from 11 games, while KKR continue to be at the second spot, being ahead on the Net Run-Rate with same number of wins. Full cricket scorecard: KKR vs RPS, Match 41

In pursuit of 156, Pune did not have a good start, as they lost Ajinkya Rahane to a peach of a delivery for 11. KKR pacers Umesh Yadav and Nathan Coulter-Nile bowled a fiery spell upfront. But Tripathi fought fire with fire, launching his assault against the KKR pacers. He was operating in the top gear right from the onset. Tripathi opened his account on the third ball he faced, with a boundary. What followed was a six and two more fours in the same over off Coulter-Nile. It was Umesh s turn to get hit for a four and a six in the next over, as Tripathi marched on.

Chris Woakes then came into the attack and picked up wickets from the other end. He first got Steven Smith for 9 and then cleaned up local boy Manoj Tiwary for 8. Tripathi, meanwhile, continued with his assault from the other end, as Coulter-Nile got carted for more boundaries in his next over. When Kuldeep Yadav came into the attack, he was not spared either, as Tripathi hit him for 3 consecutive sixes.

Ben Stokes (14) added 43 with Tripathi. In fact, his 14 remained the second highest individual score of the innings. His dismissal was followed by MS Dhoni and Tripathi s dismissals in quick succession, but Dan Christian hit the winning six in the final over to seal the game for RPS. For KKR, Woakes returned with best figures of 3 for 18.

Earlier, winning the toss, RPS captain Smith opted to bowl first. KKR made one forced change to their XI, as Uthappa missed out due to a hamstring niggle. Their out-of-form vice-captain Suryakumar Yadav returned in place of the wicketkeeper-batsman, who has been in a red-hot form this season. RPS did not tinker with the XI that won against Gujarat Lions (GL) the other day.

KKR did not have the best of the starts at their fortress, as pinch-hitter Sunil Narine failed this time around. Jaydev Unadkat sent him back for naught. In Uthappa s absence, Sheldon Jackson was promoted to bat at No. 3. But the Saurashtra lad looked off colour from the beginning. Though he got a couple of fours, but his struggle ended in a bizarre way when he was dismissed hit-wicket off Washington Sundar s bowling.

Manish Pandey then joined skipper Gautam Gambhir in a bid to steady the ship. The latter looked good, but just when he was looking ominous, he got out against the run of play. He was caught by Ajinkya Rahane at deep mid-wicket off Sundar s bowling while trying to hit the ball out of part.

The problems only compounded for the home side as Yusuf Pathan failed to fire yet again. He could score a mere 4 off 9 balls before Imran Tahir caught him plumb in front of the wicket. Pandey and Colin de Grandhomme then stitched a 48-run stand the highest of KKR innings and resurrected the innings a bit. Grandhomme was the aggressive of the two, hitting 3 fours and 2 sixes during his 19-ball stay at the wicket that fetched him 36 runs. But once they were gone, Suryakumar s late fireworks guided KKR to 155 for 8 in 20 overs. For RPS, Jaydev Unadkat was the pick of the bowlers with his figures of 2 for 28 from 4 overs.

Man of the Match: Rahul Tripathi 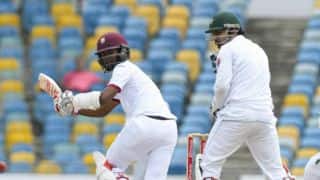 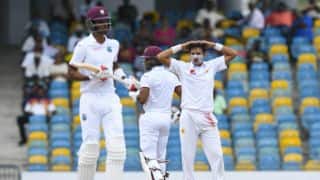