After being asked to bat first, RPS got yet another strong start, and this time the middle-order backed up well compared to their last effort to post 182 for 5.

Rising Pune Supergiant (RPS) set a target of 183 against Kolkata Knight Riders (KKR) on a challenging wicket at the Maharashtra Cricket Association (MCA) Stadium in Pune on Wednesday night. After being asked to bat first in match 30 of the ongoing Indian Premier League (IPL) 2017, RPS got yet another strong start. This time the middle-order backed well the top-order well (certainly better than their previous effort) to post 182 for 5 off the allotted 20 overs. Steven Smith top scored with 51 not out, Ajinkya Rahane made 46, Rahul Tripathi stroked his way to a 23-ball 38, and MS Dhoni showed rich form once again in his rapid 23. For KKR, Kuldeep Yadav claimed 2 for 31. Full Cricket Scorecard, Rising Pune Supergiant vs Kolkata Knight Riders, IPL 2017, Match 30

After skittling out Royal Challengers Bangalore (RCB) in the previous match, KKR pacers Umesh Yadav and Chris Woakes made an impressive start to this contest. The first over from Umesh was almost unplayable. He even produced a chance off the fifth ball but the edge off Tripathi s bat flew over the wicketkeeper. In the next over, Woakes produced a fine display of seam bowling, having Rahane all at sea off the third delivery that seamed away from the batsman s chest. FULL CRICKET SCORECARD: Rising Pune Supergiant (RPS) vs Kolkata Knight Riders (KKR), IPL 10, Match 30

However, once those initial overs were out of the way, Supergiant were once again off to a terrific start. Rahane and Tripathi struggled to find the boundary early in the innings till Tripathi hit two fours off Umesh Yadav in the third over.

However, balance was restored soon in the overs that followed. Sunil Narine started off with a tight over, conceding only 5, but both Rahane and Tripathi punished Woakes when he came on for the fifth over. Rahane slammed a six straight down the ground on a shortish delivery, and Tripathi too hit in the same area for four. Tripathi took a liking for Narine, smashing the spinner for as many as 3 fours to take RPS to a healthy score of 57 for no loss after the powerplay.

Yusuf Pathan spilled a catch running from short mid-wicket towards mid-on when Tripathi mistimed a stroke off Colin de Grandhomme, but the batsman failed to make most of the lifeline. He chopped one on to his wickets off Chawla in the next over, trying to cut a delivery outside off. Once again, Tripathi missed out on a deserving half-century, falling for a 23-ball 38 with 7 boundaries.

Smith began with a four off de Grandhomme, but he had to work hard for his runs. On the other hand, Rahane continued with his splendid strokeplay. On one occasion, he made room to lift the leg-spinner Chawla over cover for four, which was perhaps the best stroke of the innings.

Rahane and Smith added 47 runs for the second wicket in a little less than 6 overs. Rahane survived a leg-before appeal off Kuldeep Yadav in the 11th over, and even survived a stumping appeal. However, his innings ended when Narine got one to move away from the batsman, and Rahane made an error. Rahane lifted his back foot just when he had dragged it back in on time, and Uthappa had the luck to have collected the ball close to the wickets.

Rahane s dismissal witnessed a loud cheer from the Pune crowd as the venerable Dhoni strode out to bat. He did not disappoint; after dancing down the wicket for a couple of singles, Dhoni hit Chawla for a four and a six. Gambhir deployed men around the bat against Dhoni, but the ploy had no effect whatsoever.

It looked like Dhoni would bring out yet another special knock, but Kuldeep outfoxed him when he charged down the wicket off the second ball of the 18th over. He did not pick the googly and departed for an 11-ball 23.

Kuldeep got another wicket when Tiwary strode out full stretch, and though he tried dragging the back foot back in, he could only touch the crease. He was stumped for 1 to a delivery similar to the one that had helped Kuldeep remove Dhoni. Kuldeep returned with the figures of 4-0-31-2.

It looked like RPS would post yet another moderate total, but 3 consecutive sixes 2 by Dan Christian off Woakes and the other by Smith off Umesh in the final over pushed RPS to 182 for 5. Christian fell off the final ball of the innings, having scored a 6-ball 16. 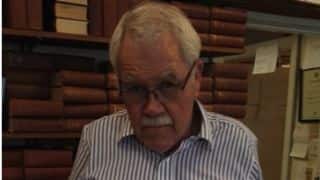