the Playing Conditions for IPL 2017 requires the third umpire to check all aspects of a dismissal when his intervention is sought by the on-field umpires.

The report added that a new addition to the Playing Conditions for IPL 2017 requires the third umpire to check all aspects of a dismissal when his intervention is sought by the on-field umpires.

According to the Law 3.1(c) of Appendix 6 of the Playing Conditions, “The third umpire has to determine whether the batsman has been caught. However, when reviewing the television replay(s), the third umpire shall first check the fairness of the delivery … Additionally, if it is clear to the third umpire that the batsman is … not out by any mode of dismissal (excluding LBW), he shall notify the on-field umpire so that the correct decision is made.”

The Law 1.5 of Appendix 6 says, “The third umpire shall only have access to TV replays … Other technology which may be in use by the broadcaster for broadcast purposes (Hot Spot, ball tracking, Snicko) shall not be permitted.”

Uthappa also had his slice of luck early in the innings thanks to umpire Anil Dandekar. He was caught behind off the first ball that he faced. After snaffling the wicket of Sunil Narine, SRH pacer Bhuvneshwar Kumar got the next ball to move away from Uthappa. The batsman followed the ball and edged behind, but the umpire was unmoved. The decision turned out to be a horrible one for the fielding side. Many felt, Uthappa should have walked back.

The Kolkata Knight Riders batsman went on to play a match-winning knock of 68, studded with 4 sixes and 5 boundaries. Uthappa s innings powered KKR to a formidable 172 for 6 in 20 overs. He added 77 runs for the third wicket with Manish Pandey, who scored 46. In their reply, SRH did not find enough support from the lower order and were restricted to a mere 155 for 6 with David Warner and Yuvraj Singh both scoring 26 each. 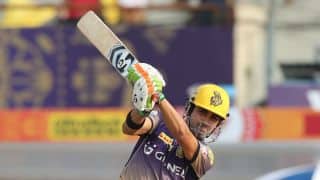