Having set DD a target of 143, the visiting side was reduced to 24 for 6 in just the seventh over of the innings.

Mumbai Indians (MI) pulled off a sensational 14-run win in Match 25 of the Indian Premier League (IPL) 2017 against Delhi Daredevils (DD) at the Wankhede Stadium, Mumbai. Having set DD a target of 143, the visiting side was reduced to 24 for 6 in just the seventh over of the innings. Mitchell McClenaghan was excellent with the new ball. He got rid of Sanju Samson, Shreyas Iyer and Corey Anderson in quick succession to leave DD reeling. MI captain Rohit Sharma believes that it was the crowd, who played their part today and helped them win, referring to them as the 12th man. FULL CRICKET SCORECARD: Mumbai Indians (MI) vs Delhi Daredevils (DD), IPL 10, Match 25

Rohit said after the match, The crowd support has been amazing, they’ve rightly been the 12th man for us. The support means a lot, they’ve been coming in large numbers and pick us up when we are down. I hope they’ll keep coming back in large numbers in the next few games as well. Rohit feels that he always believed that his bowlers could restrict 142. We were outstanding with the ball. To be able to defend 142 on that wicket was never going to be easy. We knew that we could defend any total out here, we’ve done it in the past and have the bowlers to do the job for us. We were excellent with the ball, not quite so with the bat. It was one of those games where we couldn’t kick on with the bat but I do not want to blame them for we’ve done very well in the past, the MI skipper said.

Rohit also mentioned that the wicket was dry and the slower deliveries were the need of the hour. The wicket seemed slightly slow and that is what we spoke about in the dressing room. It looked a little dry and the slower balls were effective. The bowlers did exactly that on the field and it is easy to set fields and make bowling changes. There was no dew tonight, it is very unpredictable to determine but we wanted to play our best game, Rohit said.

With this win, MI move on to 12 points from seven matches, whereas DD are placed in the fifth position of the IPL 2017 table with four points from six matches. 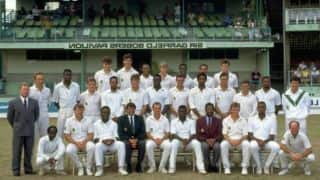