Hyderabad: The 10th edition of the Indian Premier League (IPL) began on Wednesday with India’s four cricket icons, including Sachin Tendulkar, being felicitated for their contribution to the game during an opening ceremony that was low on glamour quotient. British model-actor Amy Jackson produced a brief performance, gyrating to Bollywood numbers ahead of the opening match between defending champions Sunrisers Hyderabad (SRH) and Royal Challengers Bangalore (RCB)at the Rajiv Gandhi International Stadium. Tendulkar and his three former India team-mates — VVS Laxman, Sourav Ganguly and Virender Sehwag — did a lap of honour riding on golf carts. Tendulkar and Laxman rode one cart while Ganguly and Sehwag occupied the other one. Live Cricket Scorecard: SRH vs RCB IPL 2017, Match 1 at Hyderabad

The quartet waved to the packed house and applause followed. There was a massive roar when Tendulkar was ushered into the middle area of the ground. Another Indian legend, Rahul Dravid, was also to be felicitated but he could not make it to the ceremony as he was busy mentoring the Delhi Daredevils outfit. Laxman was honoured with a memento by head of the Supreme Court-appointed Committee of Administrators, Vinod Rai, while acting BCCI president C K Khanna felicitated Ganguly. Acting BCCI secretary Amitabh Chaudhary felicitated Sehwag while IPL chairman Rajeev Shukla honoured Tendulkar. LIVE IPL 2017: Sunrisers Hyderabad vs Royal Challengers Bangalore IPL 10, Match 1

A visual of the eight captains signing the MCC Spirit of Cricket was shown before SRH and RCB skippers David Warner and Virat Kohli entered the arena. Warner presented a souvenir to Kohli to signify all the teams’ resolve to uphold the spirit of cricket. The entertainment part, involving Bollywood razzmatazz, was quite a dampener. Jackson danced to the tunes of Bollywood numbers like ‘sara jamana’, ‘tama tama’ and ‘kala chasma’. 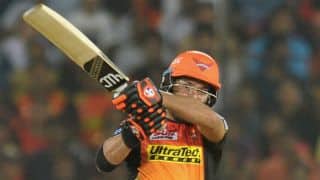 Sachin Tendulkar: Never thought IPL will be so big