Shreyas Iyer stood tall and delivered a memorable victory to Delhi Daredevils in a battle for the wooden spoon.

Not long ago had Gujarat Lions (GL) put up more than 200 on the board, but Rishabh Pant and Sanju Samson’s brilliance robbed them off a victory in Indian Premier League (IPL) 2017. On Wednesday night, Gujarat once again posted a huge total of 195 for 5. To bolster their chances of winning, Gujarat even dismissed the dangerous Pant and Samson for cheap. But unfortunately for them, another young batsmen in the Daredevils’ ranks, Shreyas Iyer, stood tall and delivered a memorable victory in a battle for the wooden spoon. Chasing 196 to win, Delhi Daredevils (DD) huffed and puffed but managed to go past the finish line with 2 balls to spare, with Amit Mishra hitting 2 consecutive boundaries to seal the deal for his team. FULL CRICKET SCORECARD: Gujarat Lions (GL) vs Delhi Daredevils (DD), IPL 2017, Match 50

Iyer smacked as many as 15 boundaries and 2 sixes to score 96 off 57, and unfortunately for the young batsman, he missed out on getting a deserving century. Iyer and Pat Cummins added 61 runs in a mere 27 balls the best partnership for Delhi Daredevils in their chase. The duo helped his side recover from a position when the contest looked as good as lost. For Delhi, the others in Karun Nair (15-ball 30) and Cummins’ 24 were extremely crucial after a poor start and a flurry of wickets in the middle stages. FULL CRICKET BLOG: Gujarat Lions (GL) vs Delhi Daredevils (DD), IPL 2017, Match 50

However, there was no encore of that on Wednesday night, as both Samson and Pant perished after playing attractive strokes. After a few fabulous cover-drives, Samson chopped one on to his middle-stump and Pant was run out by Suresh Raina, who showed brilliant presence of mind to affect that dismissal.

A delivery after Samson s dismissal, Pradeep Sangwan rapped Pant on his pads. While the others appealed for a leg-before, Raina picked up and threw the ball at the striker s end to find Pant way outside the crease. After 2 overs, Delhi Daredevils were reeling at 15 for 2.

Iyer and Nair then teamed up to take Delhi ahead. At one stage, it looked like the visiting side had completely recovered from the early blows. Iyer hit a four off Dhawal Kulkarni to begin with, and got another off Sangwan in the fourth over. It was in the fifth over when Iyer opened up, hitting Basil Thampi for 2 fours and 1 six to collect 15 runs off it.

Nair joined his partner soon, smacking Dwayne Smith for 3 consecutive fours as Delhi Daredevils reached 64 for 2 at the end of the powerplay.

Iyer and Nair added 57 runs in a little less than 6 overs, but Gujarat Lions struck in quick succession. In the eighth over of the innings, James Faulkner foxed Nair into playing a short, slow ball that ended up lobbing in the air. Nair fell for a quick 15-ball 30, which came off 5 boundaries and 1 six.

One over later, in the 10th, Gujarat dealt another blow to the Daredevils when Jadeja s direct-hit found Marlon Samuels short of the crease. Jadeja s athletic effort resulted in Samuels’ dismissal for a mere 1. Jadeja was in action soon when Iyer and Corey Anderson (6) tried converting a single into a double. Another direct-hit and Anderson walked back with Delhi under firm pressure.

Brathwaite showed aggressive intent, as he struck two boundaries off Jadeja, in the 13th over. But he fell to a short ball from Kulkarni, as Delhi stared at a defeat.

However, Iyer was still out there to turn it around for them. He smacked 2 fours off Sangwan in the 15th over and found unlikely support in Pat Cummins, who began with consecutive boundaries to make it 17 off the over.

With 58 needed off 30, Iyer turned up the heat on Gujarat when he scored 3 boundaries on the trot off Kulkarni, leaving Delhi with another 44 runs to make from 24 balls.

In the 17th over, from Faulkner, Iyer slammed a six and a four whereas Cummins cracked as six. The equation was down to 23 needed off 18, but Thampi did well to let Delhi add a mere 8 runs from the next over. Cummins fell in the 19th over looking for a big hit in the final over, and Faulkner did well to keep Delhi under leash. However, a penultimate-ball four from Mohammed Shami s bat brought the equation down to 9 needed off the last over.

After giving away 2 runs off the first ball, Thampi got a yorker right and an inside edge off Iyer s bat crashed into the middle-stump. However, luck was completely in favour of Delhi as Amit Mishra cracked two consecutive fours to help Delhi seal a 2-wicket win with 2 balls to spare.

Earlier in the day, Aaron Finch’s 39-ball 69 and Dinesh Karthik’s quickfire 40 helped Gujarat Lions reach 195 for 5 in their first innings. Delhi Daredevils had won the toss, but looking at the runs Gujarat Lions garnered batting first, it looked like the call to bowl first was wrong. However, Delhi did well with the bat in the second half to clinch a victory, which will have no impact on the IPL 2017 points table as both the teams have already been knocked out.

Man of the Match: Shreyas Iyer 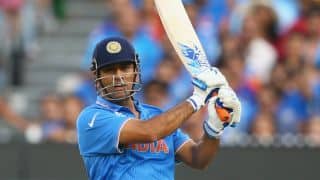