Shreyas Iyer is reportedly suffering from chicken pox, and will miss the first few matches for Delhi Daredevils in IPL 2017 and join as soon he is in the best of his fitness.

Shreyas Iyer has joined the ever-growing list of players who will be out of action in the 10th edition of Indian Premier League (IPL). Iyer is reportedly suffering from chicken pox, and will miss the first few matches for Delhi Daredevils (DD) and join as soon he is in the best of his fitness. He became DD’s third casualty, as South Africa’s Quinton de Kock and JP Duminy had earlier opted out due to injuries. Iyer was called up for the fourth Test of the recently concluded Border-Gavaskar Trophy 2016-17 as cover for injured Virat Kohli, who too will be out for a few weeks. Also read – Indian Premier League: A statistical study

Iyer, however, has been in an ominous touch of late. After ending Ranji Trophy 2016-17 as the highest run-scorer for Mumbai, he scored a stunning hundred for India A during the two-day practice contest against Bangladesh. He further continued his stellar performance, scoring almost run-a-ball double-ton against Australia in a three-day warm-up game.

Iyer was picked up for the highest price (INR 2.6 crores) for an uncapped Indian player during IPL 2016 auctions. DD’s decision to invest hefty amount on him paid off, as he ended the season with 439 runs in 14 matches and was adjudged Emerging Player of the Season.

Earlier, DD coach Rahul Dravid had said that the team will miss services of de Kock and Duminy. All the same, he mentioned Iyer’s name in the list of promising cricketers in the DD armoury. We have guys like Karun (Nair), Sanju (Samson), Shreyas (Iyer) and (Aditya) Tare, Rishabh (Pant). We will also look to strategise better and give the younger players a good opportunity. Given Iyer won’t be a part of Dravid’s strategy now, the think tank will have to dish out a new plan. 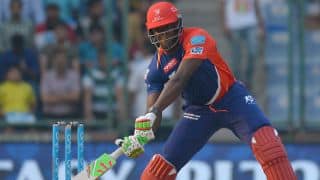