Kolkata: Former India captain Sourav Ganguly is impressed by Australian run-machine Steven Smith‘s ability to successfully switch formats. Leading Rising Pune Supergiant in the ongoing IPL, Smith guided his team to a seven-wicket win over Mumbai Indians in their opening match, scoring an unbeaten 84 off 54 balls. “He is in outstanding form at the moment,” Ganguly, who captained Smith during his time at erstwhile Pune Warriors, told reporters on the sidelines of a store launch here today. “He is just a quality player and currently one of the world’s best batsmen. He showed his class by switching formats so swiftly in such a short time,” Ganguly said. Full Cricket Scorecard, Gujarat Lions vs Kolkata Knight Riders, Match 3

Earlier, Smith overtook captaincy from MS Dhoni for RPS in this edition of IPL. Talking about him being replacing Dhoni as skipper of the side, Smith had cleared that there is no bad blood between them. There are no issues between MS Dhoni and me. We have shared some messages, MS is very supportive and it doesn t change my professional relationship with him or anyone else, Smith said.

The change in captaincy appeared to have been prompted by Pune s ordinary outing last year when they finished seventh in the points table after winning just five of their 14 matches. Also present on the occasion was Sanjiv Goenka, chairman, RP-Sanjiv Goenka Group.

Smith plundered runs against in the recently-concluded Test series against India, which his side lost 1-2. The 27-year-old right-hander finished as the top-scorer with 499 runs at an average of 71.28, including three centuries. 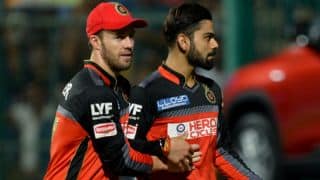