But despite a dismal performance, the young left-arm fast bowler is confident about setting things right in the oncoming game against Kolkata Knight Riders (KKR) on April 15.

Sunrisers Hyderabad (SRH) pacer Mustafizur Rahman did not have a positive start to Indian Premier League (IPL) 2017. Playing his first game against Mumbai Indians (MI), Mustafizur conceded 34 runs in a mere 2.4 overs and his side lost by 4 wickets. But despite a dismal performance, the young left-arm fast bowler is confident about setting things right in the oncoming game against Kolkata Knight Riders (KKR) on April 15. Mustafizur had played an instrumental role in helping the Hyderabad-based franchise in winning IPL 2016 by taking 17 wickets.

Talking on the eve of their game against KKR at the Eden Gardens, Mustafizur also hoped to get his trademark off-cutters right. The 21-year old Bangladeshi bowler was quoted as saying by PTI, It depends on the wicket. If the wicket is dry, it helps. It will be a day game so there are chances of getting it right tomorrow. I was not able to pitch in the right areas in Mumbai.”

“I always try to give my best for the team. We have a good bowling side so it will help us if the wicket is good.For me, it’s helpful, if the ball turns on the wicket.”

In addition to this, Mustafizur is also hoping to celebrate the Bengali New Year which will be celebrated on the match day, with Shakib-Al-Hasan who plays for KKR. Shakib too has been instrumental over years for the two-time IPL champions and is yet to play his first game in IPL 2017

Talking about his meeting with Shakib and the occasion of Bengali New Year, Mustafizur said, “I met him after coming last evening. We will plan out if he’s there tomorrow. I’ve not had rice and fish after coming here, and hopefully, we will have that dinner tomorrow.”

“I have not celebrated Poila Boisakh (the Bengali New Year) for last four-five years as I’ve been busy with matches or practice. I don’t think I will miss home much.” 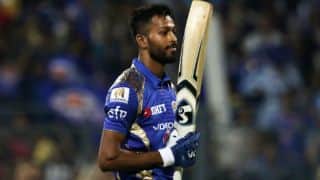