David Warner, Shikhar Dhawan, and Kane Williamson clubbed a half-century each to take Sunrisers Hyderabad (SRH) over the line against Kings XI Punjab (KXIP) in match 33 of Indian Premier League (IPL) 2017. Then Bhuvneshwar Kumar and Rashid Khan rose to the occasion once again and conceded a mere 43 runs between them, restricting the Kings to 175 in a chase of a mammoth 208 at IS Bindra Stadium in Mohali. From 10 games, Sunrisers have now emerged triumphant 7 times against Kings XI. Full Cricket Scorecard, Kings XI Punjab vs Sunrisers Hyderabad, IPL 2017, Match 33

With a player of Hashim Amla’s class in the arsenal, Martin Guptill had to wait for his opportunity. It was only when Amla sustained an injury that Kings drafted in Guptill without much deliberation. Given the way Guptill started, Kings XI might not have missed Amla’s services. He set off with two swashbuckling boundaries off Bhuvneshwar Kumar. He then used sheer power to obliterate Ashish Nehra as well. He collected a six over square-leg, a hoick to long-on that travelled like a tracer bullet (read it again in Ravi Shastri’s voice), and a pull past mid-on.

Guptill scored 22 runs in boundaries in the first 2 overs. However, in the next over, Bhuvneshwar proved why he owns the Purple Cap. He bowled a knuckle-ball to induce an outside-edge of Guptill’s bat to draw first blood.

In came Shaun Marsh, the most capped player for Kings XI. He went after Nehra as well, smashing two boundaries. All the same, Manan Vohra holed out to mid-on and gave Nehra some respite. To make matters worse, captain Glenn Maxwell went back without disturbing the scoreboard. Kings XI were 42 for 3 at this stage in pursuit of 208.

The onus was then on Marsh and Eoin Morgan to steer them close to the target. With the asking rate mounting, they had no option but to go after everything on offer. The southpaws, especially Marsh, reduced the bowling-heavy Sunrisers to rubble. Rashid was the only bowler to trouble him amidst the rampage. Marsh, in all probability, could not read Rashid’s googlies. He also provided the breakthrough, getting rid of Morgan for 26. Wriddhiman Saha, too, survived for only 4 balls. Full cricket updates: KXIP vs SRH, IPL 2017

With 70 needed off 5 overs, Warner had to bring in his go-to bowler Bhuvneshwar. With third-man up, Bhuvneshwar misfired the yorker outside off. Marsh made no mistake in squeezing it past point. All the same, that was the last of many boundaries Marsh hit tonight. Bhuvneshwar, once again with a knuckle-ball, hunted down another batsman. Marsh went for 84 off 50.

Akshar Patel was the batsman who could pull off the unlikely. He fell for a 9-ball 16 as Kings XI fell short by 26 runs.

Unlike the Sunrisers, the home team could not bowl as a cohesive unit. Six of their seven bowlers leaked over 10 an over. On the other hand, the Sunrisers took wickets at crucial intervals and kept the Kings at bay amidst the run riot.

Warner now has the most number of half-centuries in IPL, surpassing Gautam Gambhir.

Man of the Match: Rashid Khan. 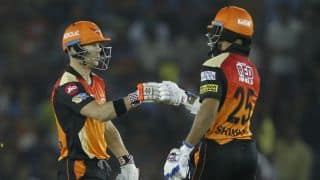 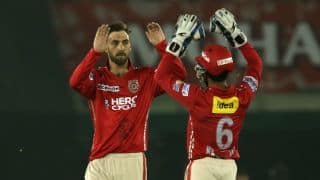