Sunil Narine will be looking to cause problems to Sunrisers Hyderabad (SRH)'s batting line-up on Saturday.

After shining with an all-round performance for Kolkata Knight Riders (KKR) against Kings XI Punjab (KXIP), Sunil Narine will be eager to maintain his form going forward in the next tie. Table-toppers KKR play their next game against defending champions Sunrisers Hyderabad (SRH) but their head coach Tom Moody made it clear that Narine is not the only threat from the home side, who are full of many key players. Both the teams will lock horns for the first time in the ongoing edition of Indian Premier League (IPL). Their last clash was in IPL 2016 Eliminator, which resulted in the ouster of the hosts. Gautam Gambhir’s side will look to carry on with the winning momentum and stretch the lead in the points tally. IPL 2017: Watch Sunil Narine reveal secret behind his attacking cameo versus Kings XI Punjab

Ahead of the clash, Moody stated, “We have enjoyed the challenge against him (Narine) in the past. We’ll be foolish to single out him as the only threat. I think there are number of key players within Knight Riders’ (Kolkata) outfit that we need to make sure of get on top of early. He is just one of the few.”

Narine helped his side pick up two valuable points on Thursday when he not only applied the brakes on KXIP’s scoring, but also opened the innings and scored a quick-fire 37. He was rightly awarded the Man of the Match. SRH will be wary of his threat and will like to play out his overs without giving him much success. 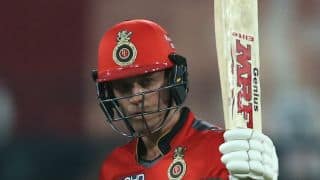