Andrew Tye dismantled the RPS batting order taking 5 wickets out of 8 and conceding just 17 runs in his 4 overs.

Andrew Tye, playing his first game ever in Indian Premier League (IPL) 2017 for Gujarat Lions (GL), created history against Rising Pune Supergiant (RPS) in the home game at the Saurashtra Cricket Association Stadium. The 30-year-old Australian pacer tore through Steven Smith-led RPS, taking 5 wickets which even included a hat-trick. Tye dismantled the RPS batting order taking 5 wickets out of 8 and conceding just 17 runs in his 4 overs. His heroics helped GL snatch their first win in the 10th edition of IPL, giving them a much-needed boost in the tournament. FULL CRICKET SCORECARD: GL vs RRPS, IPL 2017 Match 13

But despite seizing hat-trick on his debut game in the famous Twenty20 (T20) league, Tye has openly stated that his interests lie in playing for longest format of the game i.e Test cricket. After grabbing the Man of the Match award against RPS, Tye was quoted saying by IANS as, “It’s a good format of cricket (T20), but traditionally, I would still love to play Test cricket. The slower ball worked very well for me. Every wicket is different around the world, so you have to assess conditions to find out which ball works where.

Heaping praises on Tye’s brilliant effort with the ball, Gujarat Lions captain Suresh Raina said: “I thought Andrew bowled brilliantly. He is a very smart cricketer who varies his pace, especially in the death overs.”

Raina lauded his side s effort and the determination to win the game after having lost first two games in the tournament. GL had lost their opening game against Kolkata Knight Riders (KKR) by 10 wickets and were defeated in the second game by reigning champions Sunrisers Hyderabad (SRH) by 9-wickets.

Appreciating the team and their hard work against RPS, the elated skipper said, “I think when we lost two games, it was difficult for us to come back strongly.

GL made changes in their batting by opting to bench their regular opener Jason Roy and asked Dwayne Smith to open the innings along with Brendon McCullum. Both Smith and McCullum give a solid start to their team scoring 94 runs for the first wicket thus forming a strong base for the big run-chase.

Talking about the changes in batting, Raina said, “Jason Roy missed out, but then Brendon (McCullum) and (Dwayne) Smith did it for us. They have done it for CSK and they did it again today,” he added. 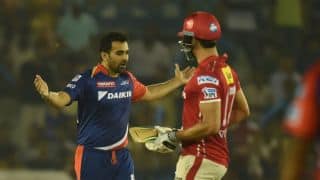