Parthiv Patel, Krunal Pandya and the sensational Jasprit Bumrah. Another Gujarati too had his share of limelight and you cannot keep Ravindra Jadeja out of the action, can you?

At the heart of Gujarat Rajkot the Gujarat Lions (GL) side were defeated by the Gujarati-owned Mumbai Indians (MI) and the men who starred for them were three Gujarati lads Parthiv Patel, Krunal Pandya and the sensational Jasprit Bumrah. Another Gujarati too had his share of limelight and you cannot keep Ravindra Jadeja out of the action, can you? FULL CRICKET SCORECARD: GL vs MI, Match 35

MI were cruising at a stage with 27 required from 23 balls and they had 6 wickets in hand when they pressed they pressed the panic button, yet again. GL got back in the game courtesy a brilliant piece of fielding from Irfan Pathan and MI had to score 11 from the final over. A six and a single later, MI needed 4 from 4 when Jadeja’s spectacular direct hit resulted in Bumrah walking back to the pavilion. Later, with 1 required off 1, Jadeja having to aim one stump pulled off a bullet direct hit to ensure it was a tie which gave GL a chance to secure 2 crucial points from this game. Twitterati could not stop praising Jadeja for the same…

Krunal Pandya Is Given Man Of The Match.

We witness exhibition of brilliant Cricket!

MI were restricted to only 11 in the Super Over. GL had plenty of firepower in their armoury to seal the win. Walked out Brendon McCullum alongside Aaron Finch. Despite the presence of Lasith Malinga, MI trusted faith on the 23-year-old Bumrah. And what followed was one of the most sensational Super Overs the game has witnessed.

He started with a no ball by overstepping but Finch could do nothing of the yorker. McCullum and Finch were left clueless as Bumrah despite bowling 8 balls in the over, conceded just 6 runs off it, ensuring a Mumbai victory.

Tweets kept flowing on Bumrah’s brilliance and we pick some of the best from the lot.

Bumrah bowling the Super Over ahead of Malinga. That’s #IPL coming of age…baton has been passed on officially. Performance over reputation

Phenomenal last over. Gujarat Lions had their moments but were denied by one of the best bowled last overs you will see. #Bumrah

Yeah he bowled a no-ball, but that was an incredible over from Bumrah. India is lucky to have a quality death over bowler. #GLvMI

Amazing again, IPL!!!! What skills from Booooomrah, brilliant super over!!!

MI with this win are now on 14 points, same as Kolkata Knight Riders (KKR) but are second on the points table due to an inferior Net Run Rate, while GL remain in the sixth spot. 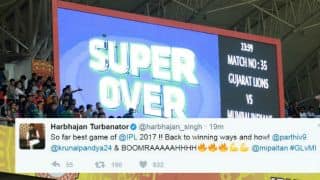