Umesh Yadav was the most economical bowler for Kolkata Knight Riders in match 37 against Sunrisers Hyderabad (SRH) on Sunday.

In match 37 of Indian Premier League (IPL) 2017, Sunrisers Hyderabad (SRH) came on top of Kolkata Knight Riders (KKR) on Sunday. David Warner was the stand out performer for his side, leading them to a comfortable 48-run win over in-form KKR with a blistering century. His 59-ball 126 led his side to 209 for 3 after which SRH’s bowlers restricted the opponents for 161 for 8 in 20 overs. Umesh Yadav, who returned with the figures of 4-0-30-0, was the most economical bowler for his side but remained wicketless. He backed his teammate and England all-rounder, Chris Woakes, for the dropped catches (coming off Warner’s blade) and termed SRH skipper as a ‘world-class batsman’. Full Cricket Scorecard, Sunrisers Hyderabad vs Kolkata Knight Riders, IPL 2017, Match 37

On Warner’s attacking innings, Umesh was in full praise. “If batsman is going on and is in good form, it is obviously hard to bowl to him. As a bowler, I don’t think it is hard. In IPL, you have to be prepared for such pressure times. He has played beautifully and has too many centuries in ODIs and Tests. He is a world class batsman”, Umesh was quoted as saying by iplt20.com.

Talking about the difference in both camps’ bowling, Umesh said, “Their bowlers had a plan and executed them. But they had a big total to defend as well. Their confidence was high. If we would have restricted them under 180, the scenario would have been totally different. We had conceded 50 runs on board within 4 overs but they curbed the run-rate throughout the innings.

Umesh also backed Woakes despite the Englishman dropping Warner on two occasions. “Had (Chris) Woakes taken the catch (of Warner), there could have been a difference of at least 30-40 runs in their score. Nonetheless, he is a world-class bowler and fielder. He as taken some good catches for us. He tried but sadly failed this time in coordination. It happens in cricket”, concluded the pacer. 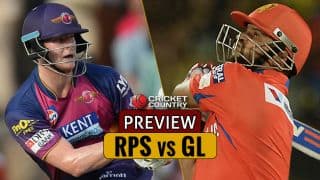