Kolkata: Pacer Umesh Yadav is likely to take part in Kolkata Knight Riders‘ (KKR) first home game of IPL 2017 against Kings XI Punjab (KXIP) at the Eden Gardens, CEO Venky Mysore said. KKR play Glenn Maxwell captained Kings XI Punjab on April 13 here before taking on Gujarat Lions (April 7) and Mumbai Indians (April 9) away. There were reports that Umesh might skip the first phase of the cash-rich league after a marathon Test season with India. Mysore on Saturday tweeted that “Hearty congrats @y_umesh. Exceptional perf 4 #TeamIndia. Enjoy the well deserved break. C u in Kol fresh & recharged on April 10! @KKRiders.” Pressed further on if he would be available for selection for the April 13 game, Mysore told IANS: “Yes. He will be available for selection.” Umesh took 17 wickets in four Tests against Australia. India won the four-Test series 2-1.

Earlier, Kolkata Knight Riders (KKR) CEO Venky Mysore said that that franchise will only comment on pacer Umesh Yadav s initial availability on Friday, and also said there was no official word yet on its pacer Umesh Yadav s unavailability. There s nothing official I heard. I also read the reports. Until, I heard something official from BCCI, there s nothing we cannot comment, KKR CEO Venky Mysore told reporters. If there s any truth, a statement should come out soon. I also read a couple of days ago that there s some workload management But we are not aware of any such [BCCI] directive, it may be a figment of somebody s imagination, Mysore said, reported PTI. 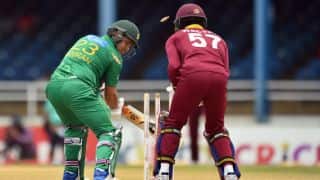