Kohli criticised his team's performance after the defeat during the post match ceremony by saying, "We don't deserve to win if we play like this."

Chasing a stiff total of 162, Virat Kohli-led Royal Challengers Bangalore (RCB) faced their first-ever defeat against Rising Pune Supergiant (RPS) at M Chinnaswamy Stadium, Bengaluru on Sunday. Skipper Kohli criticised his team’s performance after the defeat during the post match ceremony by saying, “We don’t deserve to win if we play like this.” RCB, who bounced back in their second match against Delhi Daredevils (DD) after losing to defending champions Sunrisers Hyderabad (SRH), have now lost their third consecutive match in the tournament since then. FULL SCORECARD: RCB vs RPS Match 17

Kohli’s disappointment was apparent during the ceremony as he said, “(It is) Not an easy thing to find momentum. We don’t deserve to win if we play like this. Honestly, last match we played really hard, today we let the game drift away in front of our eyes. If we lose without intent, it’s not a nice feeling.” RCB captain also criticised the way Royal Challengers Bangalore batsmen threw away their wickets, and added, “You can’t come out and think of sweeping sides away. We need to play consistently and smartly. Pune was the better team and they won.”

During RPS s inninga, Kohli looked energetic and it showed after he grasped a brilliant catch to get rid of the opener Rahul Tripathi at short cover. Kohli considered it as among the best catches he has taken and said, One of the best [catches] I have ever taken. Reflects on all the training drills. That was one of the very few positives that we can take.”

Kohli further went on to praise RPS bowling, especially the New Zealand pacer Adam Milne by saying, “He [Milne] bowled really well, assessed the conditions really nicely and stepped up. He took the opportunity with both hands.”

Kohli also indirectly reminded Royal Challengers Bangalore that they cannot play with the fear of losing. Guys coming in need to step up. We can’t play with fear of failure. We can’t bowl thinking what if we leak runs, what if it is a massive mistake in sport, especially in cricket. We have to be more expressive. Last year, we had to win four out of four and we qualified. It’s not going to happen every time, so we need to pull our socks up. If you play with intent and get out or get hit, it’s fine. You can’t be switched off and let the game drift away. As professional cricketer, were franchise cricket you to do well, Kohli said.

Fans do play a huge role in any team’s motivation and Kohli reminded the same to his team by saying, “People expect to do well. We didn’t deserve well. They have always backed us. Last year we needed their support and they were in huge numbers. We can really come back. We as players need to take more responsibility.”

RCB’s next game will be against Gujarat Lions (GL) at Rajkot on Tuesday. Kohli must be eager to taste a win and bring the winning momentum back to his side. 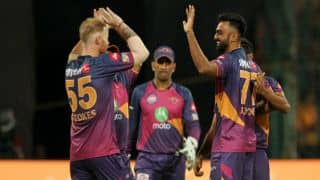