IPL 2017: “Was under pressure while bowling to MS Dhoni”, admits Kuldeep Yadav after KKR’s win over RPS

IPL 2017: “Was under pressure while bowling to MS Dhoni”, admits Kuldeep Yadav after KKR’s win over RPS

On Wednesday night, against RPS in Pune, Kuldeep bowled a terrific 18th over, where he picked up two crucial wickets of Dhoni and Manoj Tiwary to shift the momentum in his side s favour.

Kuldeep Yadav s stocks have witnessed a massive spike of late. The Chinaman bowler India s first made his Test debut against Australia in the final Test at Dharamsala and was fairly successful. Prior to that, he had a great domestic season, where he continued to befuddle the batsmen with his variations. Kuldeep has carried that momentum in the ongoing season of Indian Premier League (IPL). Playing for the Kolkata Knight Riders (KKR), he has done a decent job so far. On Wednesday night, against Rising Pune Supergiant (RPS) in Pune, he bowled a terrific 18th over, where he picked up two crucial wickets of MS Dhoni and Manoj Tiwary to shift the momentum in his side s favour.

At the post-match press conference, after his side s 7-wicket win, Kuldeep spoke at length about that 18th over, bowling to Dhoni, his role for the side in general and a lot more. As a spinner, I believe my job is to soak in the pressure and get wickets for my team, which in turn puts the pressure on the opposition. Bowling the 18th over in a T20 game is always difficult. You need to have your captain s backing. I bowled that over and luckily got two wickets today, so I am happy, said Kuldeep.

On bowling to Dhoni, Kuldeep said, It is obviously challenging to bowl to Dhoni bhai. I was under pressure while bowling to him. But I wasn t scared of getting hit for a four or a six. I flighted the ball and was looking to dismiss him. Fortunately, it came off today.

Kuldeep also praised Man of the Match Robin Uthappa s effort in the game, both with the bat and behind the stumps. 85-plus score in T20 is equivalent to 150-plus in Tests. If a player scores that much runs in a T20 game, he almost ensures your win. So, Robin Uthappa did a fantastic job both with the bat as well as behind the stumps. He is working a lot on his keeping, and improving too. Hopefully he continues to stump the batsmen the way he did today, said Kuldeep.

Kuldeep also emphasised on the importance of playing full season of domestic cricket. Playing an entire domestic season, getting highest runs or wickets obviously helps you a lot. You have that momentum then, when you come to play a tournament like IPL. Playing the domestic season has helped me a lot, given me a lot of confidence coming into IPL, he quipped.

Coming to his own bowling, Kuldeep said though the variations help him bag wickets, he backs his strength, which is his stock delivery. it s [wrong un] a variation. You can use it in T20 to confuse the batsmen. But I really believe in my Chinaman bowling, rather than wrong un or flipper. My identity is because of Chinaman bowling. Obviously wrong un gets you wickets. The overseas batsmen struggle to pick it. But when you dismiss Indian batsmen on the worng un, it boosts your confidence, Kuldeep concluded. 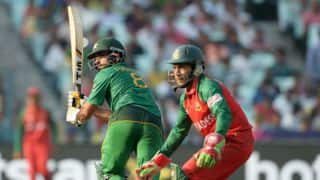 Pakistan tour of Bangladesh 2017 called off